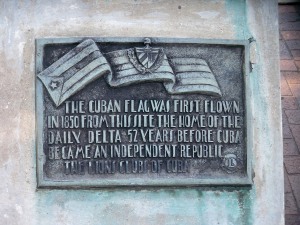 The past few days have been rainy rainy, so when the sun came out today and S. wanted to come over for a swim, I readily agreed. We then decided to go see a movie. At the movie theater. I hadn’t seen a movie in movie theater since December. I used to go to movies all the time, but then I moved to New Orleans, the city with no movie theaters. Well, not quite. There’s the Prytania, which is nice, but only shows one movie at a time, and I’m never quite on the ball enough to get there to see what I want to see. And of course there are lots of places in the suburbs, but I don’t want to drive out there. I want to ride my bike. But there’s also the place in the mall that shows a great variety of movies, and that’s where we ended up tonight. Of course, you get some light in the theater around the black cloth seeming stapled up over windows, but heck, s’alright. This is New Orleans. We just get used to stuff like that. Ok, so we don’t have a lot of movie theaters, but we do have history. And on tonight’s ride along Poydras, I noticed this plaque, posted by the Lions Club of Cuba. It seems that Cuba was “liberated” in 1850 with the help of soldiers from Louisiana and several other states who rode the USS Creole down, with Cuban flag in tow. This is the same USS Creole that saw a slave revolt in 1841 while the ship was carrying slaves up the Atlantic coast. That’s not on the plaque, though. I learned a lot about John Dillinger tonight, but I also realized I’ve got a lot to learn about Cuba and its relationship to Louisiana. I’m off to Texas for several days, so the biking will be to a minimum; I’ll catch you on the blog when I get back. Maybe I’ll learn a thing or two while I’m gone.

One thought on “Cuban Flag Commemoration Plaque at Poydras and Magazine”