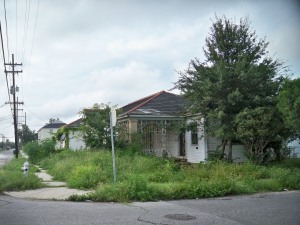 It has been a rainy mess around here lately, and it has definitely been putting the kibosh on my long rides. I really don’t like to start a ride in the rain. I mean, I’ll continue in the rain, but I prefer not to ask for the slippery roads and streetcar tracks and drivers even less apt to see bicycles. So when the rain slowed down this afternoon, I jumped at the chance to take the bike  out. I rode out to Hollygrove to check out Lil’ Wayne‘s old haunts after seeing his recent VH1 Behind the Music special. I took this picture of a house on Monroe at Palm, overgrown with lawn and weeds and cat’s claw, the wrought iron crumbling along with the roof. Other houses on the surrounding blocks look much the same. There’s the structure that has been reduced to its steel skeleton and the car barely peeking out from the overgrowth that used to be a carport. What I think was Weezy’s childhood home is still there, for rent. In his special he said he can’t go home anymore, that his neighborhood is gone. The first few blocks right off Earhart were hopping with people sitting on porches, grilling and turning up the music, but these blocks seem good evidence that he’s right. Of course, there’s always more to a neighborhood than meets the eye, so we’ll see what happens here.