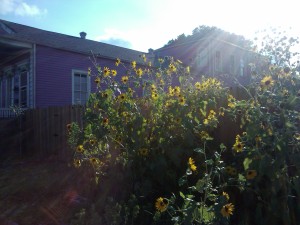 Today was the last day of summer school–school’s out!–and I spent the afternoon bouncing around town, lunch with N., pinkberry with S., and racquetball with R. It felt good to get some sun on this most lovely day. I rode up Baronne  realizing it had actually been a week or two since this particular route in the daytime; I hoped those sunflowers over on Erato would still be in bloom. And they were. I like passing the same spots over and over again precisely, watching the seasons change. But I’m happy to give that ride up St. Charles to campus a rest and take some time to case the city rest of the city again. I got back on my bike and pedaled home. I passed the Muses development–it’s almost done. They’re putting in new palm trees and crape myrtles and opening a leasing office. I’ve been biking by there since it was just a cleared lot with a solitary metal staircase leading nowhere. I like riding the same places, but sometimes it’s also nice to take a little break. I won’t be riding around New Orleans for at least the next three days–I’m off to Cleveland for dearest L.’s wedding. If I’m lucky, I’ll find a way to bike a bit around some new-to-me streets.

One thought on “Sunflowers at Baronne and Erato”