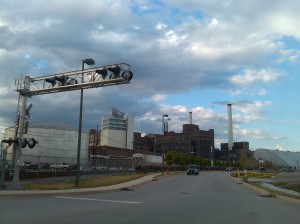 N. planted three clues about where to meet her Friday night, and she told me to ride my bike there. I did a little sleuthing by way of the internet to figure out that I was supposed to be at 1121 Hull Street, so after a day of lazing and working I carried Brompty down the stairs, put air in her tires, and headed down the hill–that way I could fold up my bike and toss it in the trunk of N.’s car and let her drive me back up the hill.

The ride down was such a pleasure. I hadn’t been on Brompty in good long while, and I’d forgotten just how sweetly responsive she is, and zippy, too. The heat wave was over and the air was cool, the clouds just rolling in. And then I was speeding along with traffic on Fort Avenue, enjoying that rush of being part of the road and almost as fast (in my head, at least). I took the slight left to follow Key Highway East, but promptly feared it would lead me only into the Under Armour plant and not back out to Hull Street, so I stopped and checked my googleymap, which indicated I should probably turn around and go back up to Fort. Details, details. And then I looked up. I stare at this part of town regularly, from the other side of the harbor. It’s pretty over here, too, and the factory against the sky–it’s the urban version of the mountain view, and I was in the mood to find it just that pretty. I spend a whole lot of time thinking about its ugliness, but it was a beautiful sky and a beautiful day, and I was in for a beautiful night, so I snapped my shot, turned back to take a left and a left and a right, and folded up my bike to toss in her car so we could do the rest of the night on foot. Turns out if I’d just kept going I’d have arrived at the same place–lesson learned. I also learned that this is the very spot where immigrants arrived by the hundreds and then thousands from 1840-1920. Many would be put straight on the B&O railroad and sent to the midwest, other settling in Baltimore and the immediate area. How so very lost so very many must have felt at this same spot.

One thought on “View of the Under Armour Plant at Key Highway E.”