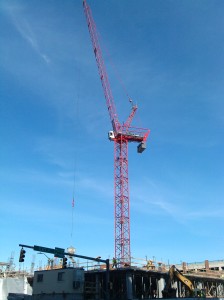 Monday was crisp and beautiful, and oh it felt good to get out on a bike ride! I had errands to run, so I took the Surly and pedaled down this hill to Harbor East for some groceries before heading to Canton for a much-needed haircut (though I got the $17 hair “cut” I paid for–oh well). I hadn’t been in this part of town in awhile, because the weather’s been terrible for biking, and when it’s good, I kind of just want to go to a circle ride freely around it–Druid Hill Park, Lake Montebello, etc. Everything’s the same, mostly, and it felt good to feel at home. And then I made my turn from Central toward Aliceanna and this–a crane in the sky building another mixed-use (but I doubt mixed-income) resort-style living facility. This has happened in every city I’ve ever lived in, and I’ve lived in a lot–the downtown areas are cleared out by white flight and capital flight, they push a highway through the middle, and everything and everybody left is criminalized–incarcerated, impoverished, pushed to the edge. And then downtown becomes the place to live again, and the people who hung on are pushed out as the suburbs move back to the city center, “clean” it out, and put up new housing, because what’s left, what’s been lived in, is substandard, and all of the sudden that matters. And here we go again. It is an odd sensation, biking past as much vacant housing as I biked past on Monday, only to see the crane in the sky building a tower just a few blocks down and over from a public housing development and within a stone’s throw of row after row of empty row houses. And then I rode to the new Canton Crossing mall, because gosh, it’s convenient, and home again, the long way, so many Baltimores in just  few miles.