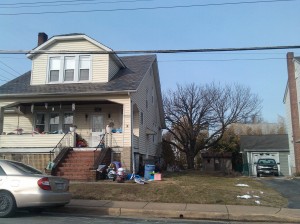 Thursday’s commute was another chilly one, and slow, because sometimes it is all just that exhausting. I flew down the hill, folded my bike and myself into the train, and folded us out for a trudge up the hill, everything feeling a little too heavy. A meeting, a couple of classes, another meeting, some writing, and the weight was lifted by the promise of a free evening–the sort of free that feels extra special because you’ve knocked so many things off the to-do list, and everything else can wait, really. All that plus the downhill made the ride back to the train so much more pleasant, and I smiled and bobbed the way you do when you know you’re off the hook and there’s nothing ahead but pajamas, cats, and television, even if you do have a tendency toward picking the depressing. It was the sort of ride where if I could whistle, that’s what I’ve have been doing–an excellent turnaround from the morning. I stopped as I made my turn onto Birch to snap a picture of the house on the corner, but mostly of the many toys strewn around it: bikes, big wheels, kiddie shopping cars, slides–all the toys, nothing locked up, everything still there, always there. I thought about our assumption that everyone is trying to take everything we have all the time, and how actually, a lot of the time, nobody’s taking our stuff, and wouldn’t it be great if you were a kid and you wanted to borrow one of those bikes lying there in the yard and take it for a ride, if no one else was using it? But that would be stealing, and nothing’s worse than stealing, right? Private property–what a drag, amirite? And then I took a right and a left and a right again and sailed home, feeling pretty damn lucky to get to commute by bike now. Weather’s looking up–I’m guessing those yard bikes won’t be still for long.