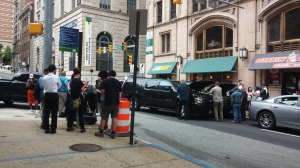 Thursday at 10am, that’s what time the judge in the bench trial of Caesar Goodson was set to rule. Thursday at 10am, the third trial of the cops indicted in Freddie Gray’s murder. Gray was walking around his neighborhood that day in April 2015, and then he was chased by cops, dragged into a van, driven several stops, and arrived at the police station with a neck that “felt crumbly, like a box of rocks.” And yet here we are, more than a year later, a mistrial and an acquittal, and nobody thought this next decision would be anything but an acquittal. Folks are blaming the prosecutor, the police, the media, “the system,” and here we are, another acquittal announced 23 minutes late.

I rode my bike down to the courthouse to see what the response was like outside the courthouse. There was a news team set up on every corner, reporters pacing back and forth, grabbing the same interviews, planning carpools to the next related announcement, piling their cameras on cafe tables in between rounds of the same story, the one we’ve all heard before and know we’ll hear again–four more times in this case, if they retry Officer Porter and the three remaining officers. And there it will be, the ultimate triumph of the passive voice–Freddie Gray was killed, his neck was broken, his neck was crumbly, like a box of rocks, and yet no one will have done this–Freddie Gray, the object, no subject accountable for his death. For all the news crews, there will still be just a couple of stories: the prosecution fumbled this case; it is virtually impossible to convict police officers; hey, look, Baltimore’s not rioting! All of those may be true, but I hope there are also stories that figure out and tell us how, when we break this murder into so many separate parts, it turns out a murder did not occur at all–or at least not one where anyone can be held accountable for playing a role in his death. So many reporters, so few reports. I’ll be patient.

And then I walked my bike through the dwindling crowd and leaned against the side wall of the courthouse, hoping to eavesdrop on some officers on their smoke break. Traffic was backed up, but not because of cops, but because this one big black car needed a jump from another on a narrow street already filled with news vans and cop cars. Someone yelled out that our democracy needs a jump, too. Indeed, indeed. And then I stopped for a quick lunch and rode back up the hill to meet friends for an afternoon beer. This is what it’s like to be white and middle class in Baltimore, I thought. Yes, indeed.

One thought on “Jumping Cars at Lexington & Calvert”