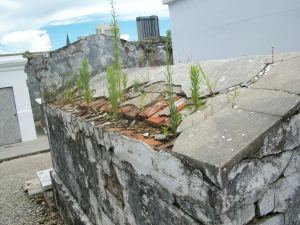 Today I rode my bike down to the Quarter and then walked over to the Treme neighborhood to visit St. Louis #1.  My guidebook advises me to never go to this cemetery alone due to crime concerns and the hazardous surroundings.  This is because the cemetery abuts Treme Street, and this neighborhood–only two or three blocks back from the Quarter–is considered unsafe, most likely because of its housing projects, general poverty, and largely Black population.  Assumptions about safety are, as per usual, coded for and by racism.  Fill in the usual narrative about who belongs in and can claim which spaces from whom.  But this isn’t what I want to write about today.  What struck me today was this scene, this broken down and abandoned tomb rent by decay but now supporting new growth.  Green grows everywhere in this city, putting an odd sheen on loss.  At St. Louis #1 this seemed an obvious metaphor for the life that always follows death.  It doesn’t always feel this way, though, to see plants literally eat up and over abandoned buildings and neighborhoods destroyed by poverty, racism, neglect and only finally breached levees.  Consider this scene from my ride downtown:

This warehouse is in the beginning stages of being reclaimed by plants (I want to write, but don’t want to write, “Nature,” here).  The power pole in front is covered with growth, capped up high by an efflorescence of greenery.  The door on the side is open, revealing a graffiti-filled space and plants starting to grow inside.  I imagine (because it is all I can do at this point) that this stretch of Annunciation Street used to be alive with commerce and life, but it is now decaying and being reclaimed, not unlike the tombs at St. Louis #1.  Except here it doesn’t feel like a flowery metaphor for the circle of life.  Here it just feels like loss.