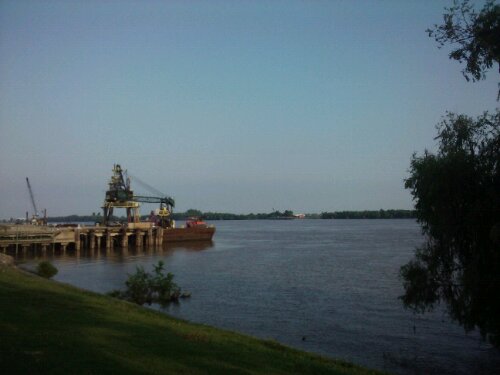 I spent my Fourth of July at home, working on this and reading that and just generally relaxing through the moodiness that accompanies moving and one’s seemingly imminent departure from New Orleans until it was time to get out of the house and on the bike to see how folks were celebrating Independence Day. My first stop was the casino, a guilty pleasure of mine. I like to go in there with $20 for some time with the penny slots and drinks I would never order in real life–today it was a white wine spritzer and white zinfandel, neither of which I’ll be ordering again. I peck away at the penny slots and after just a few minutes there is absolutely nothing in my mind except pressing that button. It is one of the few places where my mind is quiet, odd as that sounds…maybe I should look into meditation. Whatever. Today brought a surprise $100 jackpot, so I took my winnings, got a treat at the frozen yogurt shoppe, and began a self-satisfied pedal Uptown to meet friends at the Fly for a picnic. When I got there the grill was going, there were hungry flies and ants, and a kid and a ball and a collective desire to play catch. I snapped this picture of the river not because the river is “America,” or anything like that (though I could certainly make a case for the pivotal role played by the Mississippi and docks like these in the growth of the nation), but because it was just so pretty there today. We threw and caught the ball, letting the kid set the pace, and my mind was pleasantly empty again–it was lovely. I rode back downtown, grabbed a burrito and a large soda, because Harrah’s was buying, ran into friends at the river, watched fireworks, and then caught up with S. and L., who put their bikes in the spare room and shared their bottle of champagne. Not a bad day, not at all, and easy to do because I travel by bike. 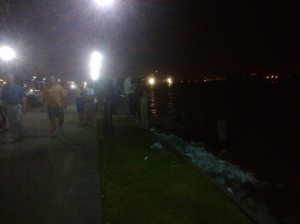 I don’t know if you’ve heard, but the river is rising, so after an evening with friends I took the bike out to check on the flow. I sped along St. Claude–good lord, I love a bike lane–and headed to the top of the bridge over the Industrial Canal where the water was high, maybe even higher than a couple of days ago. Then again, maybe not. END_OF_DOCUMENT_TOKEN_TO_BE_REPLACED 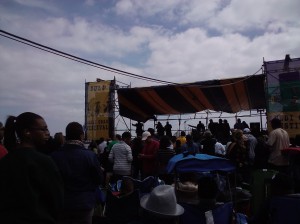 Here’s the thing. I love riding my bike, but Mardi Gras time is really more walking speed. I see things entirely differently when I’m walking–I’m closer to the ground and moving three times more slowly, so I find myself wandering places I don’t normally notice. And there’s a lot to see during the carnival season. As a guy I was chatting with as we paused at a stop sign on our bikes pointed out yesterday, Mardi Gras is all about fantasies (and the only fantasy we saw around us was the dream of finding a place to put the car–take a bike or walk and expand your fantasy life!). So yes, this is another guest post from a pedestrian. END_OF_DOCUMENT_TOKEN_TO_BE_REPLACED 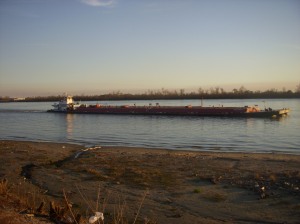 When I left home on Friday afternoon for a weekend retreat in beautiful Raymond, Mississippi, it was literally freezing. Imagine my surprise returning to bright sunshine and warm temps–it feels like springtime up in here! I was exhausted from the long weekend, but it was a most excellent exhaustion from time spent with a truly remarkable group of students, faculty, and staff. END_OF_DOCUMENT_TOKEN_TO_BE_REPLACED 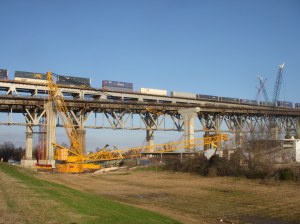 The weather outside today was simply beautiful, enough so that I didn’t mind having to be in my office at noon to meet J., who calls that the crack of dawn (which it sort of is, for a Sunday). After a quick meeting I rode over to catch the Tulane women’s basketball team in their CUSA showdown against Houston. END_OF_DOCUMENT_TOKEN_TO_BE_REPLACED 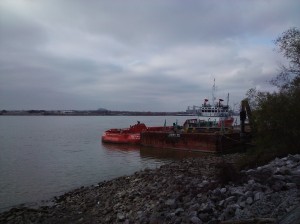 Today was the first day of classes for the spring semester. I love the first day of school. It’s like the first day of the baseball team: everyone’s in first place, no one’s fallen behind yet, and everything’s all new and crispy. Love. It. I got up early, hopped on the bike, and headed to campus. END_OF_DOCUMENT_TOKEN_TO_BE_REPLACED

It was a stormy last day of the year today, and I spent much of it inside, reading, reading some more, watching, and thinking about what a lovely 2010 I had. There was so much good stuff in it–books, music, friends, cats, bicycling, festivals, music, learning–I really has a most excellent year. And then it was time to go out. On New Year’s Eve. This is a dangerous night for a biker, especially in a town like this one where drinking and driving is totally normal. (You can get a daiquiri from a drive thru, for pete’s sake.) END_OF_DOCUMENT_TOKEN_TO_BE_REPLACED

I had a thoroughly delightful Sunday, grading papers, reading, looking through job ads, working on my professional website, and when I finished up my work, I was most definitely in the mood for a long bicycle ride. I made a few tiny adjustments to my brakes and headed out to the levee, wanting to just pedal without monitoring the conditions of the pavement. The sun was just starting to go down, the weather was noticeably cooler than it has been, and I just let my legs get into that spinning rhythm with a song on repeat. END_OF_DOCUMENT_TOKEN_TO_BE_REPLACED

It was another hot and humid day in New Orleans, the sun was shining, and S. was still in town, so after riding our bikes to campus for class, we headed over to N.’s for po-boys at Domilise’s and a bike ride to the zoo. Well, Domilise’s was closed unexpectedly, and the zoo’s closed on Mondays, so we grabbed sandwiches at a terrible restaurant and decided to ride over to the levee to look at the Mississippi River. I could look at that river forever. END_OF_DOCUMENT_TOKEN_TO_BE_REPLACED 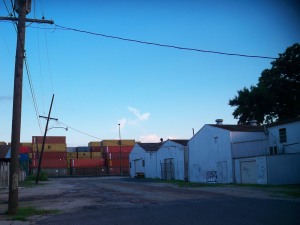 So, I generally spend quite a bit of time on my bicycle. I used to think that all bikes were basically the same, but that’s just not true. My bike feels like my bike. It’s in the shop, though, and I’ve got a rental bike, and I wanted to take it out, see what she could do. Yeah, I like what the Surly can do. I like how big and heavy and steel she is. I miss my bike. But this one’s fun too. Sigh. Anyway. Tomorrow. END_OF_DOCUMENT_TOKEN_TO_BE_REPLACED