Ok, so this isn’t what I saw riding my bike around today, but I’ve been in a writing funk that I’m climbing out of, so I’m going to write about some past bike rides as I get back in the habit of biking and writing about it. This picture is from a ride I took back in early November. I was in New Orleans for the American Studies Association annual conference, the first in person since my last trip in November 2019. It was so, so good to be there, to see so many old friends, to be all sweaty and hot in November. I was going for the intellectual community, the colleagues and friends, but if I’m being real, I was going there for the biking.

END_OF_DOCUMENT_TOKEN_TO_BE_REPLACED

Oh, it felt so good to ride my bike yesterday that I was most especially looking forward to today’s ride. I did a quick jaunt to lunch with K. before heading down to the river. I waited with all the tourists heading to the aquarium for the train to pass, and then bike to a bench, sat back, and enjoyed the view. It has finally been good and summer rainy the past few days, and the wind is stil blowing waves, clouds rolling in. I had to get back to the office, though, so back on the bike I went, pedaling fast. My fall commute’s going to be much, much longer; might be time to practice. I grabbed a ridiculously large iced tea from the cafeteria, and on my way over to Newcomb Hall, I noticed these birds poking around in the mud we’ve finally got with their needly beaks. Yeah, y’all are going to need a bath after that meal. A woman passed me, remarking the the birds are a long way from home. Yes, yes they are.

Oh my, but I had a busy day! I was up early and worked from home until it was time to hop on the bike to campus for some quality work time in the office. I parked and locked at the mercifully empty-for-summer bike racks in front of the student center, grabbed lunch and walked over to Newcomb Hall. I snapped this picture of construction on Drill Road where the university is fixing up the street, finally. I couldn’t quite see what was down in that hole due to fencing keeping me out, but I could see some open cement pipes that I assume are for drainage. I love it when the road is opened up so I can see what’s beneath the skin, but I don’t love the loose gravel and sand that just lay in wait, hungry for front tires. I wonder what Baltimore road conditions are like. Anyway. I taught until almost nine, and when I left the building, the moon was an absolutely ridiculous glowing ball in the sky. So pretty.

Today’s bike ride took me up to campus for summer school night school with a quick ill-fated stop at the post office–the summer heat takes its toll on power supplies, and the station on Louisiana Ave was all burned out. I wasn’t much looking forward to tonight’s class session on sexual violence. Important stuff, yes, but it’s hard to talk about, especially when it is so personal for so many of us, and for just as many, it seems, it is all overblown and women need to just use common sense and stop dressing like sluts and drinking too much. Yeah, in my experience it can be a tough dynamic to manage in the classroom. Class went surprisingly well, with most everyone staying respectful but still voicing honest opinions and concerns. When I was riding my bike home I passed a number of women out for evening runs, a wise move in our already-stultifying summer heat. As I whizzed by them I thought about how recalcitrant this idea is, that the way to solve sexual violence is for women to take all precautions, to make sure we aren’t outside alone at night and that we only drink with friends (though, especially for college women, friends and acquaintances are their most likely attackers), if we drink at all. Those simply can’t be our solutions, because the women I passed tonight need a world where they can go running after dark, and I need a world where I can bike home at any time, because that’s how I’m going to be moving through the world for the foreseeable future, and I am most assuredly not taking applications for an escort. I don’t know the answer, but I know it will mean some serious rethinking of masculinity, and as much as I don’t want to teach this stuff, I’d better stick with it.

Today’s bike ride took me to work, and it’s going to take me home, after I finish waiting at this restaurant with this long line of little leaguers and new Tulane students here for orientation so I can grab a burrito. I never really figured out how to properly feed myself during this summer school night school class; 5:45-8:45 interrupts both my early and late night eating schedule, and that 20 minute break where students are asking me this question and that and I’m just trying to take a breath doesn’t leave me much of a chance to heat something up in the microwave and scarf it down. So here I am, another burrito on another Wednesday night. I snapped this picture while waiting in line, of a guy straining black beans and doing dishes. There’s a whole world behind my not being able to make myself dinner tonight, but it is so easy to pretend this food just dropped out of the sky and onto my plate. It didn’t. 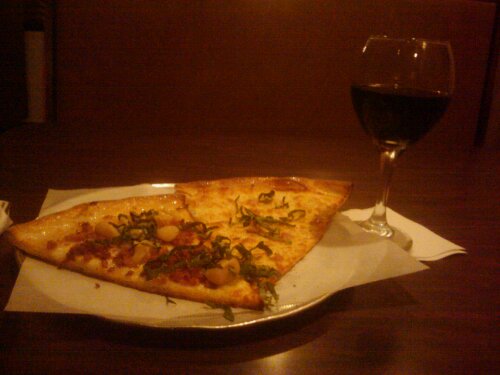 I spent my morning grading, writing, laundering and cooking before it was time to bike through the haze to campus for my night class. It was one of those classes that went fine–even better than fine–where students talked to each other instead of just me and the conversation appeared to run by itself. But it was also one of those classes where there’s some real violence. That’s the flip side of teaching about race, gender, and sexuality: I have to listen to and turn into learning moments some incredibly racist, sexist, and homophobic stuff. That’s my job, and I love it–it is work worth doing, and for that I am grateful. But sometimes it gets to me in spite of how hard I am to what I talk about every day, and tonight it did, though I didn’t show it–hey, we’re learning, and I get that, and I’m genuinely glad I can create an environment where students say that stuff out loud so we can actually talk about it. But sometimes it gets to me. When that car laid on the horn as it sped past me on a street more than wide enough for the both of us, it came out, and I was pedaling through tears, saying to myself over and over again, “I belong, I belong, I belong.” Because I do, on my bike, in my body, regardless of my gender or sexuality, and so do you, and we are all here, so let’s figure out how to share this space without asking some of us to shut up and quit whining. I kept on pedaling until I got to Slice where I knew they would sell me pizza with bacon on it, red wine, and leave me alone. Riding your bike on the street is activism, people. Come out, come out, wherever you are. 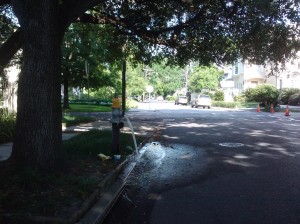 I have been moving for the last couple of days, from the Garden District to Central City for about one month before moving to the Marigny and then on to Baltimore (don’t ask). There’s no way around it: moving sucks. There’s always one more box that needs to be packed, a loose postcard here, old corn cob holders there, and the job is just endless, not to mention the part where it totally gets in the way of my bicycling time. END_OF_DOCUMENT_TOKEN_TO_BE_REPLACED

Teaching is the best job ever, and I love it, but after a long semester and in the midst of a multi-move summer, I really am not in the mood to teach summer school night school. But I gotta eat/buy a mattress in Baltimore, so after a long, long day finishing up packing the apartment, I hopped on the bike and pedaled to work. If I have to teach right now, I want to teach this class to these students. END_OF_DOCUMENT_TOKEN_TO_BE_REPLACED

I’ve said it before, and I’m going to say it again, but this time in brief: I love me some pomp and circumstance. I got on my bike this morning, swapped the SPDs for some wedge heels, and went to Dixon Hall to sit in the balcony and whoooooo for my dear friend R., who picked up a Master of the Arts in Latin American Studies today. It was awesome. And then there was food and champagne, and then a lunch and another ceremony, and hugs and pictures and more of those “chicken” “quesadillas” and another fruit tree, followed by dinner with M. and her positively lovely family (Dad loves national parks! and history!), and then I rode my bike home in the dark, full up on good feelings. Congratulations, graduates!

I hopped on my bike this evening and headed to campus for tonight’s Oak Wreath dinner, thrown by the Newcomb College Institute in honor of outstanding graduating female students. My dear student M. invited me as her guest, and I was more than happy to attend. Each of the 20 or so students took turns talking about their professor-date, and then each professor talked about the brilliant and sassy student who invited them. I talked about reading M.’s final paper from our class on feminist activism–it was so smart, creative, and brave, it made me cry, and talking about it got me all choked up. (I appear to be a crybaby, at least lately.) And the same thing happened over and over again, and there are so many more stories of teachers and students at all levels all over this place…love, love, love it. And then I got back on my bike and did a loop around the park before heading home. Bittersweet.