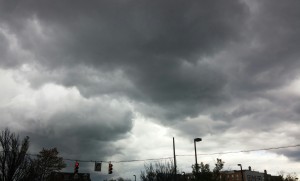 My dad was full of advice. If you knew him, you are smiling right now because you know how much advice he gave you. And sometimes it was really good advice, though I rarely admitted that, especially not in front of him. One of his best pieces of advice was to never start a bike ride in the rain. You’ll end plenty of them in it, he said, so why start out like that? I thought of that advice as I hopped on my bike on an early Thursday morning. It was raining, and there I was, starting a ride in the rain. If I could talk to him I’d suggest he amend that advice–never start a bike ride in the rain, unless following that advice would mean having to take the bus in Baltimore. END_OF_DOCUMENT_TOKEN_TO_BE_REPLACED

Everything predicted thunderstorms Sunday, but Brompty and I had things to do, and I mistakenly believed my jacket was waterproof, so we headed out between downpours for a ride to Broadmoor to see M. and D.’s new digs, including–so awesome–the baby’s room. It was an easy ride, retracing old steps on new bike lanes. I remember when the very first bike lane was installed in the city, and now the are everywhere. And there’s a new streetcar line, though that one doesn’t make much sense until you remember the Super Bowl was here. Infrastructure’s improved for industry, not residents (and this certainly isn’t just a NOLA thing), and here the industry is tourism. And I’m a tourist now, enough to get lost crossing under the I10 and just avoiding a dead end to the freeway on ramp. I took the bike lane on MLK and smaked left on Galvez, happy to have friends who moved to a neighborhood I never got to explore much. I overshot my right, dead-ended and turned around, and finally got my muddy no-fenders self to their door for breakfast and catch-up. Afterward, and after another downpour, it was back on the bike to Mid City to see R. and her new digs.all the bike lanes and streetcars in the world can’t help with this coty’s lack of drainage, so it was all avoiding puddles and small lakes there and then after back to the Treme. I meant to head straight back to S.’s house, but then I saw the dogs, so many dogs lined up for Barkus, rolling late due to weather. I remember when this was an upstart, and it still is, I guess, even if Bud Light signs welcomed me to it. And you can’t just join the parade; I watched a volunteer close the gates of Louis Armstrong park on a rather stunned gentleman and his pocket pooch. You need a “marching pass” to join a walking parade? Wow. And then the skies opened up again–my luck had run out. 20 minutes standing in the rain and it was time to thow on the towel. I pedaled “home,” a soggy mess, happy to have seen some old friends–people, pets, and problems. 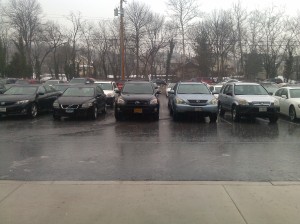 I checked the weather reports before I left for work on Wednesday, even broke it out into 15 minute intervals, and the rain wasn’t necessarily going to fall, and if it did, maybe not until 10 at the earliest, and I was catching the 9:25 train. I did a little online shopping for the rain pants I wished I had and then rode under threatening skies to the train station. And then those skies opened up and I rethought that “I’ll get them later” moment at the bike shoppe when they asked me if I wanted to add fenders to the Brompty. END_OF_DOCUMENT_TOKEN_TO_BE_REPLACED

I woke up to a cloudy, cool, and windy fall Saturday, and oh, it felt good. N. asked if I might want to spend the afternoon with our books out at Fort McHenry–I could ride my bike and meet her, and she’d drive with a blanket, pillows, and some bottles of water. I looked up at the gray skies and felt the breeze and thought, YES, GREAT IDEA. Because in spite of the look of the weather, I really, really wanted to ride my bicycle. END_OF_DOCUMENT_TOKEN_TO_BE_REPLACED 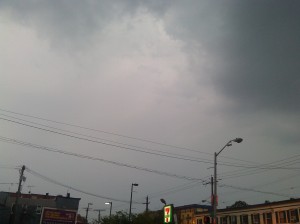 It wasn’t much of a week for bicycling, I’m sad to say. Workdays stretched into the night, and then there was the part where it was just flipping hot out. Why, September, why must you be all mid-90s and humid? I want my cooler air cycling, please! I did a quick pedal down the hill to meet S. for a beer on Tuesday night, but other than that, nothing. END_OF_DOCUMENT_TOKEN_TO_BE_REPLACED

Thursday’s skies and weather report certainly suggested a bicycle ride would be a bad idea, but oh boy, I needed to ride my bike. And there were hints of blue in the sky, so maybe it would be fine. And it was. It felt so good to just fly down the hill and up the hill and around the harbor and up the other hill to Federal Hill. A. and I caught up on all the gossip and then watched each other write and not write and write and then I looked outside again, and maybe the weather report was right. I packed up quickly and snapped a picture of the sky over the neighborhood. It did not look promising, especially with rain already starting to fall. I made it around to the Science Center before the skies just opened up. The deluge! It was incredible, and the wind was blowing the rain horizontally into me. My shoes promptly filled with water, and there was so much water in my eyes I had to get off my bike and walk–I couldn’t see a thing. I finally squinted out enough water to get back on the bike and slowly pedaled up the hill toward home, feet slipping off the pedals, brakes squealing, and puddles splashing. This song would not leave my head, and for some reason I couldn’t stop smiling. Once you’re all wet, you’re all wet, no worries, it’s summertime.

The weather report called for thunderstorms, and the skies were growing grayer by the minute by the time I was ready to leave the house, but what am I going to do–drive to Federal Hill? Please. I packed my bag and hopped on my bike to fly down the hill, a song in my ears–a rare moment for a girl like me who follows the rules and knows better than to dull one of my most important senses when riding in the streets–please don’t tell. Oh, it just felt so good to fly down the hill, like being free and alive and like summertime and being a kid, and then I was dodging pedestrians around the Inner Harbor before shifting into an easier gear to ride up the hill to meet A. for beer. I locked up just as the skies opened up–I’m lucky like that. I snapped this picture of the corner of Light and Barney right before heading into the restaurant, and by the time I was ready to leave, the thunderstorm had blown right through, and I flew home, pumping my legs up and down and just enjoying the feel of the mechanics of the thing. It was a good weekend; all it needed was one more steady bike ride, and I’m glad I fit that in between the rains.

I heard a rumor it was raining outside, but I figured since the weather report on my smartyphone said there was a 40% chance of rain I would probably be able to avoid getting too terribly wet, seeing as how I was only riding a couple of miles. Welp, that 40% chance was 100% chance, and the ride down Bedford Avenue on Brompty reminded me–again–that fenders are good thing if you’re going to ride in the rain. Fortunately, I don’t melt, so I just kept on pedaling and when i got to the donut shoppe to meet E. I took cover under this scaffolding, rung out the back of my skirt, and listened to the music coming from the church behind me. The thing about NYC is that there’s always scaffolding. And then there were artisan donuts and a cold, wet ride up the Franklin Avenue bike lane to home, with extra donuts in a bag for yesterday’s half marathoner. This wasn’t the best weather for a ride, but I’d still rather ride in the rain than get around any other way. Thanks, New York, for another excellent weekend enjoying your fine bicycle infrastructure.

Oh, it wasn’t easy to leave the perfect mid-70s sunshine of New Orleans for the sleeting skies of Baltimore, but I live here now, so there you go. Yesterday was a bit chilly, but we got a surprise (to me) warm up under heavy clouds today. Things started to look more and more like rain, so I put on my bike shoes and headed to the park for a few turns around the reservoir. It was so, so warm, so I took off my coat, shoved it in my pannier, and pedaled my way to the park. END_OF_DOCUMENT_TOKEN_TO_BE_REPLACED

I had a dinner date with R. in Locust Point tonight after a long day of work and other work and swimming and work. It was still warm out, but all the weather reports said temps were about to drop and rain mixed with ice was moving in. But oh, I wanted to ride a bicycle, so that’s what I did. I pedaled with rush hour traffic on the way there, up and around and down Fort Ave., a right on Steuert, and then to find a bike rack. END_OF_DOCUMENT_TOKEN_TO_BE_REPLACED