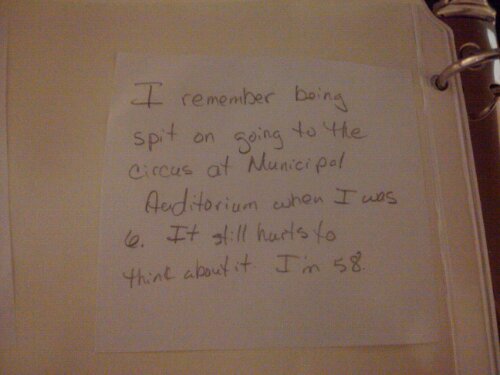 I woke up uncharacteristically early this morning, so even after fussing around for a couple of hours, I managed to catch much of the morning session of the Danziger Bridge case. I hopped on my bike and headed down to the courthouse, locking up to the Where Ya’ Rack bike rack in Lafayette Square–thanks, YLC! The last witness before lunch was Ignatius Hill, a cop who was on the Budget rental truck that carried the cops and their guns to the bridge that morning of August 6, 2005.

END_OF_DOCUMENT_TOKEN_TO_BE_REPLACED

I didn’t plan to go back to the courthouse for more testimony in the Danziger Bridge case this afternoon, but after reading about the case and watching that Frontline episode this morning–I’m on vacation–I felt the pull of the courtroom. I hopped on my bike, leaving camera and cell phone at home (hence, no picture), and headed downtown. END_OF_DOCUMENT_TOKEN_TO_BE_REPLACED 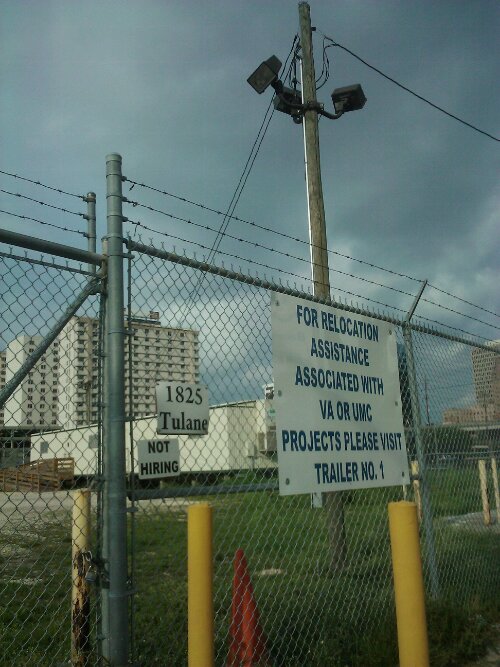 My excellent summer roomie E. invited me to join her to sit in on the Danziger Bridge trial that started Monday at the federal court building downtown on Poydras. I don’t know if you are following this trial against police officers charged with shooting and killing two people, injuring four more, and executing the most brazen cover up since the Henry Glover case, but if you’re not, I advise you read up. It is such an important case, about the extent of the police state, its limits or lack thereof during disaster (and if you haven’t had a disaster in your community yet, just wait–we do things by “disaster” now), and what justice will look like in a city that is, as J. often says, at war with its people. I had the day off, so I decided to hop on the bike and ride down to check out today’s witness. Yep, our trials take place in open court. I locked up on a street sign and headed in for two chilling hours of slow, tedious testimony about a seven page report, a seventeen page report, a thirty four page report, a forty six page report, and a fifty four page report (though the defense says that wasn’t a thirty four page report–those were notes) that taken together, painted a picture of a most elaborate conspiracy to obstruct justice. Michael Lohman, the NOPD lieutenant testifying today, when asked why he did it, said he didn’t want to get in trouble, or get his friends in trouble. His biggest regret is for the people who were killed, injured, and whose lives are forever scarred by these murders. They didn’t deserve it, he said. It is deep, this part where staying out of trouble was worth so much more than the lives and blood of others, a stark example of what happens when deep down, we don’t recognize that other people are real, and lead full, complicated, messy lives, just like we do . People are complicated. I stayed for part of the cross examination–Lohman acted alone, those were pages, not a report, and preparing a report means you wrote it all alone–before calling it a day and heading out for a bike ride. I snapped this picture out on Tulane Avenue. Relocation assistance is available for those affected by the new hospital project. Not hiring, though. This city, man, this flippin’ city. 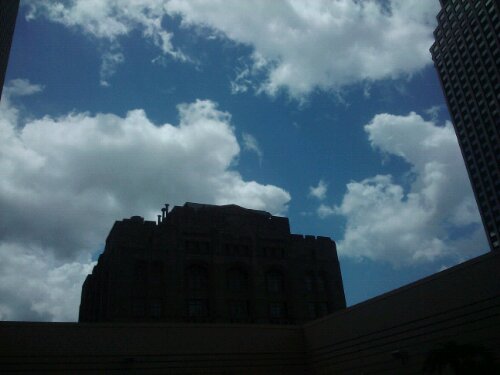 I had the day completely free and I’m on vacation, so I figured I’d fill it with reading and bicycling, my two favorite things. I spent the morning reading–check–and then hopped on the bike for the super-quick ride downtown to meet L. at her hotel. Rumor was, she had a belated birthday prezzie for me. I locked up to a stop sign and headed inside. I live in New Orleans, so I never stay in hotels. Turns out, there are giant hotels with pools on their roofs! I snapped this picture between swims and before the rain started pouring. Yep, rain again, and it totally thwarted my afternoon riding plans. I ate my Pinkberry under the Doubletree Inn and rode home under light sprinkles, figuring I’d made the best of unpleasant weather. Tomorrow, tomorrow. 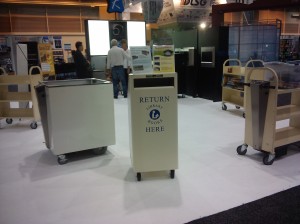 I woke up with leaden legs for the second day in a row, and I didn’t even bike anywhere yesterday! I guess lots of walking and dancing aren’t exactly rest, but I couldn’t imagine two days in a row without a little pedaling, so even though I deigned to drive to brunch this morning, I took the bike down to the Convention Center for another visit to the ALA convention. END_OF_DOCUMENT_TOKEN_TO_BE_REPLACED 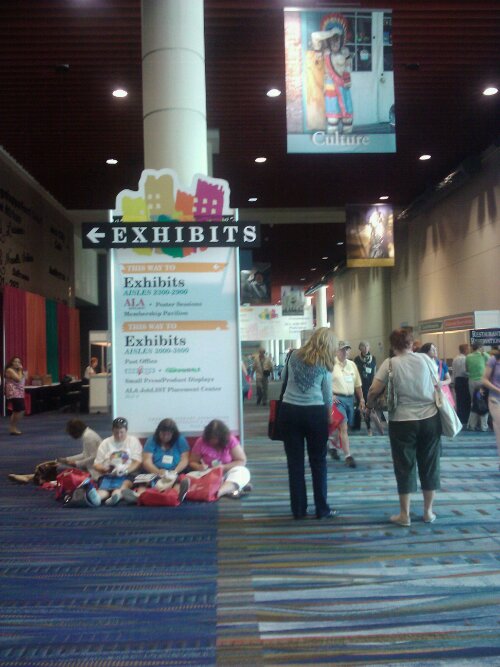 My sister’s a librarian, and so are some of my favorite people I’ve never met (thank you, interwebz!), so when I found out the American Library Association was holding their national convention in little old New Orleans, I was pretty excited, hoping everybody would show up; then budgets and schedules and my surprise loss of my apartment conspired to keep quite a few folks away. But that’s no reason for me to stay home! After riding around doing this errand and that, I ended up at the Morial Convention Center with thousands of librarians, all with their badges and red tote bags and 300 page program books. I don’t have the $200 to get in to the thing, but I can roam the halls and see librarians in their Annual habitat. After New Orleans flooded after Katrina, ALA was the first convention to honor their contract and come here. ALA has been on the front lines of protecting us against the prying eyes of the Homeland Security state. Librarians are the guardians of one of our last shared public resources. I mean, they get a copy and then let us all read it, one at a time? That’s pretty flipping radical in this moment where everybody needs their very own one of everything. Yeah, I can’t afford to go to their show, but I’m happy to sit here and watch them march along, figuring out how to help the rest of us find what we want to find, read what we want to read, and ask questions we didn’t know we wanted to ask. I hope they all have a wonderful time this weekend. And that the Convention Center gets some damn bicycle racks. 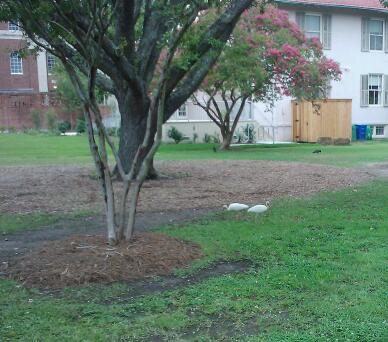 Oh, it felt so good to ride my bike yesterday that I was most especially looking forward to today’s ride. I did a quick jaunt to lunch with K. before heading down to the river. I waited with all the tourists heading to the aquarium for the train to pass, and then bike to a bench, sat back, and enjoyed the view. It has finally been good and summer rainy the past few days, and the wind is stil blowing waves, clouds rolling in. I had to get back to the office, though, so back on the bike I went, pedaling fast. My fall commute’s going to be much, much longer; might be time to practice. I grabbed a ridiculously large iced tea from the cafeteria, and on my way over to Newcomb Hall, I noticed these birds poking around in the mud we’ve finally got with their needly beaks. Yeah, y’all are going to need a bath after that meal. A woman passed me, remarking the the birds are a long way from home. Yes, yes they are. 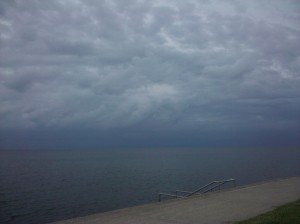 Yesterday’s attempt to get a bike ride in to change the mood was foiled by rain, but today, after getting some writing done at home,  some grading done at the coffee shoppe, and a scoop of ice cream, I got on the bike and headed out for a ride. END_OF_DOCUMENT_TOKEN_TO_BE_REPLACED 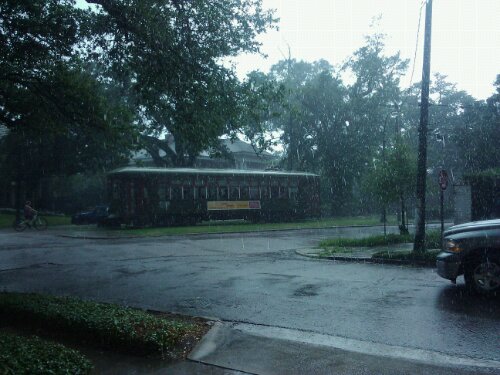 The day started out nicely–a little reading, a little writing–and then I graded some papers, and the mood started heading down. hill. It gets frustrating, how many students are just ill-prepared for college-level reading and writing. We are doing something seriously wrong. I moped around about it for a bit, and when the mood didn’t lift, I got on the bike, figuring that would help. But my plan was foiled by rain; I could see it before I could feel it, and that’s always a bad sign. I wear glasses–nothing fun–or safe–about riding in the rain. I snapped this picture while squished under an awning, and waited. It was the kind of rain that just sped up as the sun rolled in, and tap, tap, tap, I waited. Ok, fine, I’ll just get wet. I pedaled to the office, taught a class that left a terrible taste in my mouth, and rode home ahead of the next rain. Sometimes you just have days like this. 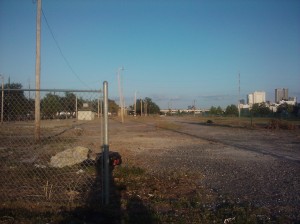 After a much-needed day of doing absolutely nothing yesterday, and a morning and afternoon spent finishing up a project, I was ready to get on the bike and head out to see what might happen today. And then I felt the heat. Sometimes I’m up for biking in it, sometimes, not so much, and today I was in the mood for something a little cooler. END_OF_DOCUMENT_TOKEN_TO_BE_REPLACED