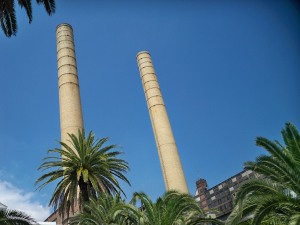 I woke up to birthday phone calls and an empty day stretched out before me.  Yes, it was time for a bike ride. I decided to take Jack out for a tour, wherever she chose to go. We rode down to the Bywater for lunch and the over to the Lower 9th to stop by Fats Domino’s house. I decided to spend most of my birthday riding around the neighborhood, up Claiborne to Arabi and over to St. Bernard parish to see what I could see. I spotted these two chimney-like things in the sky and wanted to see what they were, especially since there were clouds of something poofing out next to them. I followed the signs to the Domino Sugar refinery in Chalmette, where I snapped this picture. I love that with my bicycle, I can just step outside and pedal, following whatever I happen to see in the distance, and see so much I would never see on bike or on foot. Today I went here, of course, but I also stopped by the Louisiana National Guard headquarters, the temporary branch of the St. Bernard public library in Arabi, a shut down off-track betting place, the remains of a the brick office of a fortune teller, a new corner store right over the Industrial Canal, art galleries in the Quarter, and so, so many other things. I spent my birthday on my bike, riding wherever grabbed my attention, sweating like a New Orleanian, especially when I stopped riding. That seemed to give the sweat a chance to really, really run. No matter. It was a fantastic day of riding and taking pictures and reflecting on this past year, which was, by all accounts, positively delicious. I can’t think of a better way to ring in a new year than on my bike. Next time, though, I’m bringing even more water.

One thought on “Domino Sugar Refinery in Chalmette”