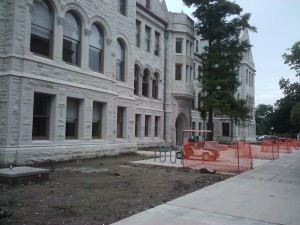 I’ve been watching this documentary about New York City, and it is blowing my mind. I am a lot of talk about the importance of bicycle infrastructure, but part of me thinks we’ve already got the roads we’ve got and it might just be too much trouble/money/work to really fundamentally change them. And then I learn about Robert Moses and the development of car culture. As Robert Caro says in the documentary, looking out over one of the expressways through the city, “this didn’t have to be this way.” Our built environment is the articulation of a whole range of assumptions, social choices, priorities, and whose homes count and whose don’t. Whole neighborhoods were gone, ways of life, people completely uprooted from their homes. The ripple effects of those roads and the changes they demanded extend far and wide. Building infrastructure is not neutral, cars are not neutral. Building for bicycles and pedestrians as well as cars means building for an entirely different way of life, one that is, I would argue, more democratic, made for all of us, not just drivers, and built to make movement safe and possible for everybody. Our current setup is not natural; we can make different choices. It’s a fight for every last piece of public space, but today, as I rode my bike up St. Charles and onto Tulane’s campus to do some work, I was happy to see this bike rack installed outside the newly renovated Dinwiddie Hall. That’s an acknowledgment that we’ll be riding our bikes there, and I’m happy to see it. More, please.