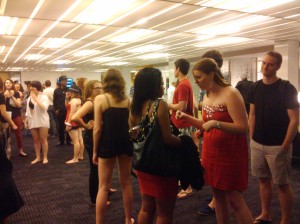 Today’s Sunday bike ride took me over to Mid-City for an iced tea and a vegan oatmeal raisin cookie (that actually turned out to be kind of good) with S., who is leaving town soon to spend some months farming in Fairbanks, Alaska. How awesome is that? I’m already scheming how I can go visit. I took the long way back Uptown to meet friends for dinner and then pedaled against the wind to Tulane to check out this year’s student production of the Vagina Monologues. Now, I’ve got some issues with the Vagina Monologues. There’s the paternalistic tone of its yearly campaign that often seems out of step with what women in those countries are already doing, the easy reduction of politics to representation and personal empowerment, the squeamish feelings I get, no matter how good the actors, when college students perform the monologues of survivors of genocidal rape, the essentialism and reduction of women to their vaginas–I thought we wanted to be more than that?–the terminological mistake–I think they’re mostly talking about vulvas, not really vaginas so much (vulvae? vulve? vaginae?), etc. And then there’s the part where you see your students in their underthings, mingling about after the show in the LBC. But you know what I love? How excited the performers are, how deeply felt their connections are to each other and themselves, and how wonderful it is to see students who were meek little mice in Introduction to Gender and Sexuality Studies get up there and use their voices in front of over a hundred people. I ran into one of those students as I got on the bike to head out. She was one of the very quietest ones, and tonight she told me that now she is “just really into women’s politics.” Awesome. I got no problems with that. I also spent part of today thinking about how hard the U.S. worked to try to make Jim Crow segregation work in the Panama Canal Zone while also allotting privileges by citizenship status. This country will do some crazy pretzeling to preserve white supremacy, I tell you. And I also spent a lot of time thinking about how it feels to balance on a bike, and what it feels like to lose it for just a second, and how it’s a feeling that comes from your core like few feelings do. I wonder why that’s such an intense feeling. Yeah, it was a good day all around.