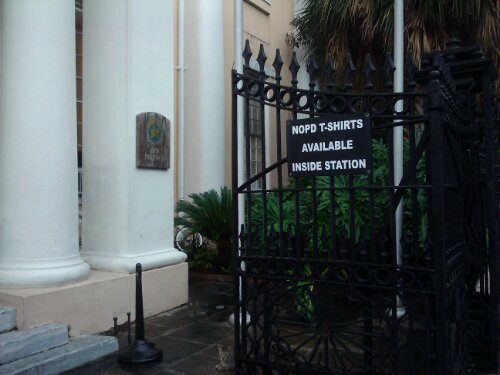 Today’s ride took me Uptown from my current digs in the Marigny for lunch with N. and then to the office where I took care of last minute things for my trip to Baltimore tomorrow. I had meant to also stop by the courthouse as the Danziger trial started again, but the skies opened up and kept me and my bicycle in the office for most of the afternoon. I rode home under crazy thundering skies, stopping for a treat and then coffee with S. I had a bee in my bonnet about how little I have been taught about Frederick Douglass–he was one of our premier statesman! Why don’t they teach us that in schools!–and she filled in some blanks for me–friends, man, they’re the best. After a quick stop at home to get the cat out of the rain, I was back on the bike to meet R. and her kid for dinner. I pedaled up Royal as fast as I could to beat the rain, just stopping to take a picture of this sign outside the 8th District police station. T-shirts for sale? Really? I wonder who buys such things, and if the market’s been hit by the fallout from Danziger or Henry Glover or the cops arrested during their own prostitution stings (I thought we had decided to decriminalize!) or the other cops giving instructions to keep a special eye on all the Black men in town for Essence Fest or any of the other scandals showing this to be one of the most corrupt forces in the nation. Nah, I’ll pass on the shirt. After dinner I did my loop around the Bywater, deftly avoiding collision with that driver taking a left turn in front of me at the intersection of Poland and St. Claude. Look alive, people. It’s dangerous out there, but that’s no reason to stay off your bicycle.