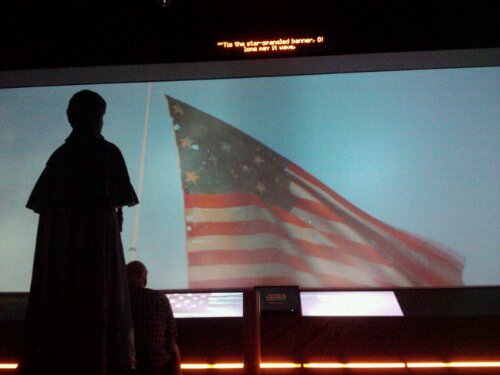 I had nothing to do on this lovely day in Baltimore, so I spent my morning checking out the Walters Art Museum–beautiful–and doing a quick tour of the Pratt Libraray main branch–I had to ask at the desk if it was really the public library, it was so nice (it is, and according to E., everybody loves that library). K. then picked me up, showed me the Peabody Library, which totally looks like Hogwarts, and then to lunch. And then it was time to take a bike ride. I tossed my National Parks passport in my bag and rode downhill to Fort McHenry, home of the star-spangled banner. That was a lot of downhill riding, and what goes down must go up. Pedal, pedal, pedal, would I be able to make it back up? But first, a tour of my first Mid-Atlantic NPS site for my first Mid-Atlantic NPS passport cancellation stamp. This site was crazy, which I should have guessed, what with it being called a national shrine. I have been to a lot of parks and museums that represent America to itself, but nothing quite as full-on patriotic. I swear, the flag threw up all over that place. I pushed through the crowds–so many people!–and read all about the War of 1812 with barely a mention of the Battle of Orleans; Chalmette National Battlefield is making a very different argument about the meaning of the war, but I digress. Then the movie started. You really just have to see it, watch the flashes from above signifying bombs bursting in air, the flags-in-light disco-balling at our feet, and closing with this giant flag and the swelling tones of our National Anthem. And then the screen slowly rose, revealing a bank of windows, and were gazing upon the Fort itself and Our Flag proudly waving, as it has done since that fated night. And then I remembered to stand up and headed out, did a tour of the Fort itself, and then it started raining. And it was time to ride home, in the rain, uphill. It was a slow slog, but it felt so, so good. God, I can’t wait to have my bike here.

2 thoughts on “The Star-Spangled Banner On Screen at Ft. McHenry National Monument and Shrine”