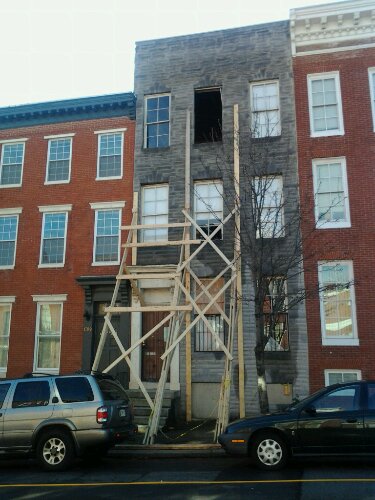 Today’s ride took me from Charles Village out to UMBC for another day of my winter session class. I was in a good mood after a productive morning, so I pedaled happily along, using that easy peasy gear for hills into the headwind and reminding myself that I wasn’t in a race, not at all. I decided to vary my route a bit to avoid Monroe’s speedy traffic, so I took a left on So. Carey and a right on Hollins. I stopped to catch my breath and take a picture of this row house just before Fulton that is all strutted up so it doesn’t fall in the street. Construction is a seriously creative endeavor! This street mostly looks like Brooklyn to me, and few of the houses look like vacants to me, though the surrounding streets certainly have their fair share. A woman stepped out of her house and asked me if I was just in the neighborhood to take pictures of vacant houses. We struck up a conversation–rehabbing this house has been on hold for months due to danger of collapse, her wife just quit smoking, I quit smoking years ago, isn’t it great, do I want a ride, etc. Turns out she runs a life coaching business and is putting together a mentorship program for girls at local schools, and I have a bunch of students who might make great mentors and who also might be in need of some life coaching. I sense a win. I got back on my bike and thought about how these sorts of encounters and contact are impossible in cars. Walkable and bikeable neighborhoods are just better for life itself. I got to campus, choked down lunch, taught about globalization, economic restructuring, and the production of poverty in the Third World before getting back on my bike and rolling past the detritus of Baltimore’s own structural adjustment on my way back home.