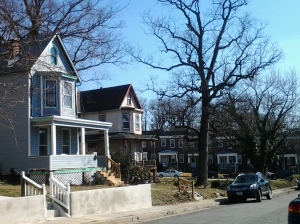 I was in Philadelphia for a couple of days, bikeless, so I was happy for the sunny and free afternoon to get a little pedaling in. I rode over to Old York Road through Waverly, Pen Lucy, and Govans to Belvedere to meet G. and B. for soup and sandwiches. I remember the first time I made this ride, straight up York Road on a 3 speed. This was much, much easier. After eating and chitting and chatting I headed east in an attempt to run into a park or maybe get myself lost. I followed the signs down the alley to Morgan State and did a circle around their campus. They’re doing some repairs to the Frederick Douglass statue outside that beautiful main building, so you’ll have to go around. I headed back in the general direction of home, and I even got to point the way to Alameda and Belvedere to a wayward driver, like I knew where I was, which I sort of did. I retraced my steps, wondering where all the row houses had gone and how I’d managed to live in this town for six months and not even know these neighborhoods existed. I had just been lamenting the small-town-ness of what feels like a perpetually empty Baltimore, but I’ve just barely gotten here; I’ve barely found my way around yet. I snapped this photo from the end of the block at Argonne and Lowndes where these stand-alone houses are sandwiched between streets that are just row after row of these short brick homes, every block a reminder that development happens in bunches, just like the devastation of neighborhoods. And then I was back on St. Paul and flying to home. Yep, it felt good to ride a bike to nowhere in particular on a sunny day. Spring’s right around the corner.