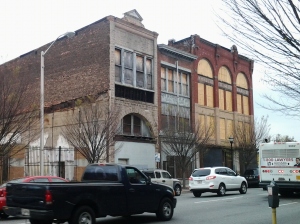 Another spring break day meant another day of riding my bike around town, and oh, but it feels good to pedal around aimlessly! I rode down to the bike shoppe to take the clown bike out for another spin and then headed down to Fells Point for some frozen yogurt and a think. I mean, I don’t need another bicycle, not at all, and for that price I could get a real bike. I wandered into another bike shop and looked at theirs, including that one gray and orange bike with the carbon belt drive, but I didn’t want that one. I want the clown bike. I got back on my bike and headed up the hill to home. I took a right on High and a left on Low, because how do you have an intersection of High and Low. And then I was on the corner of Gay and High–I mean, are you serious with this?–and I snapped this photo of boarded-up and rotting-out buildings on one corner. On the other corner is the shiny new Baltimore City Juvenile Justice Center. The building opened in 2003 and can house 144 “juvenile delinquents” and also houses a resource center, but its right in the middle of all these other prisons and jails and other carceral institutions, so the “resource center” part seems a little bit cynical. I ride by that center all the time, and it is one of the only shiny things in a neighborhood of wire and blight. Might be nice to shine some other things for a change. I pedaled on up, snaked up to the park, and did three laps with many, many neighbors doing the same thing, in our many different ways.