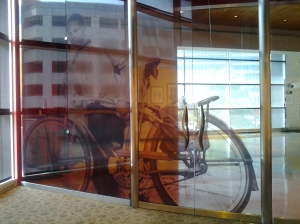 Today’s ride took me down the hill to the Star-Spangled Flag House and Museum of Star-Spangledness for a little research for this thing I’m writing. It was an easy coast down the hill, but I have a request to make of cars: please don’t pull out into the crosswalk at such speeds? You’re close to pulling out into my lane, but you’re most definitely in the pedestrian’s lane, and that’s dangerous. You’re also blocking the curb cut I need to go up if I”m to stay on the officially marked trail; this is why my utopia is all vehicular cycling. But I digress. I locked up and headed into the empty museum, redeemed my promotional coupon for a membership, and headed inside Mary Pickersgill’s house. I followed along with the cell phone tour, looking for Grace Wisher, headed back to the museum to continue to search, took some pictures, made some notes, found Grace Wisher–oh, Mary was doing Grace a favor–and then it was time to get out of there. The Lewis Museum is right next door, so I stopped in to see their new special photography exhibit, “Growing Up AFRO.” I took this picture of the art on the exhibit’s glass doors, of an AFRO newsie selling papers by bike. I know this isn’t the point of the exhibit, but oh my goodness, there were a lot of bikes in these pictures. Kids delivering papers by bike, bikes taking four of the twelve students home from the school they were desegregating, bikes taking kids to the segregated parks and movie theaters and pools, bikes everywhere. I thought a little about urban renewal, and about the more recent trends of increasing poverty in the suburbs and more and more white people moving back to city centers, and how now there’s a push for bike lanes. And then I stopped for a snack and a little writing before making a quick trip to the pool, hot tub, and sauna at my new fancy gym before pedaling back up the hill. Yep, it’s always a good idea to take the bike out.