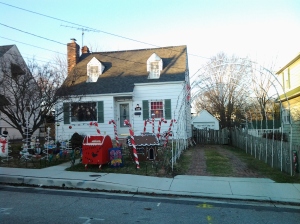 Day two of the multimodal commute was so much easier than day one–isn’t that always the way? I loaded up my bag with work stuff, lugged Brompty downstairs, unfolded it in a jiff, and zipped down the hill. It was the kind of cold that makes your eyes blur dangerously. Oh, wintertime. The conductor from yesterday’s train recognized me and pointed me to a train car that would open at the Halethorpe station, and when it did it was just a quick unfold and pedal up the hill and down and up again to campus. After a day in the office it was time to head back to the station. I knew I wasn’t in a hurry so I took my time as I floated down Poplar. Man, Arbutus has some holiday decorations, which I guess comes from the lawn-having business that is the suburbs. there were at least five creches on this street, and that deflated North Pole Thomas the Tank Engine was reinflated by the afternoon. In my yard, that thing would have deflated and blown away weeks ago. I snapped this picture of a particularly done-up yard, replete with  a giant box for letters to Santa, giant candy canes, and giant candy cane arches over the driveway. Where do they even keep this stuff in the off season? But I bet if I lived in this neighborhood or rode these streets regularly for years the appearance of Santa’s letter box would be a yearly treat. We shall see, we shall see. Two stops on the train and up the hill to home, thinking about tomorrow when i can take the Surly out again. I miss that bike.