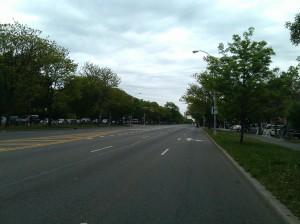 Oh, today was just perfect. E. and I woke up early, choked down bananas and coffee, and headed over to the crowded start of the Brooklyn Half Marathon. E. has been training for this for a long time, and it’s her first race at this distance. There were 25,000 other runners all lined up in projected pace order stretching blocks and blocks down Eastern Avenue as music and aimless chatter spilled out of loudspeakers as we both jumped up and down waiting for the start. The rest of the morning consisted of all of them running and me taking the Brompty up and down the race course to catch another glimpse of my sister. I spent a good long time on Ocean Parkway as runners made their way down the Prospect Expressway. I can’t explain the sweet thump thump thump of thousands of runners making their way down the asphalt, the gentle hum of and thrum of the crowd. After I caught another picture of Our Hero I rode the bike path the rest of the way, stopping every mile or two to give another cheer, and oh, it was just the best parade ever. I made a quick stop at the Coney Island amusement park bathroom before rolling out to Surf Avenue to meet up with everyone–and it really felt like everyone. And then everyone headed to the subway and I decided to ride back home. The runners had largely completed the course but the roads weren’t open yet, and the streets were all mine. I WILL TAKE ALL THE LANES, I shouted in my head as I weaved in and out of lane markings and rung my bell at the rare pedestrian or police officer who wandered in my path. I passed a couple of other cyclists who couldn’t stop smiling either–I mean, look at this street! Who gets to ride a bike on an empty street like this in NYC, or anywhere, for that matter? I would like to request a universal and permanent ciclovia, please. And then the cops opened up the roads and it was back on the bike path, which was fine, but for a little bit today I felt like the only person in the entire city after spending most of it packed in and surrounded and squeezed. And then I was biking through the park before getting spit out at Grand Army Plaza for a quick trip to lunch and then home to E.’s. It was a wonderful day made so, so much better by the bike.

2 thoughts on “An Empty Ocean Parkway Near Avenue N”