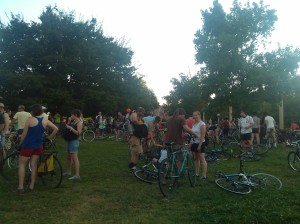 Friday’s evening ride took me down the hill and to the right to Pearlstone Park, a place I’d been a bunch of times but didn’t know it had a name, to meet up with 1,000 other bicyclists for another edition of Bike Party. I hadn’t been planning to go, but when R. asked if I wanted to go, I couldn’t think of a reason not to–always an excellent situation for saying YES. This Bike Party was going to be a little different–the police wanted to be more involved. I guess there are some concerns about 1,000+ cyclists taking a good 30 minutes to get through intersections, holding up traffic and, well, I can’t think of any other reason the police would want to be involved, right? This news was met by the usual opinions that arise when somebody calls the cops: Let’s be on our best behavior so we can keep having the party. Does this mean we can’t drink beer? Don’t be the one bad apple that spoils the barrel. Who called the pigs? This is why Critical Mass was better. Great–now we are protected from cars.  As we stood there watching the mostly-white crowds gather I wondered what the police response would be to a group of 1,000+ Black people gathering in a park and setting off to block traffic for hours on a 10-15 mile route through the city. And then there was the comment I heard someone say as we pedaled through Clifton Park: Good thing we’ve got these cops–just look at the neighborhoods we’re traveling through. I looked at the neighborhoods we were traveling through, waving at all the folks standing on corners and sitting on stoops waving back, others dejectedly sitting in their cars, as would any drivers anywhere, and some streets virtually empty, more cops in the neighborhood probably the last thing those streets need. Just because we ride bikes doesn’t mean we necessarily have anything else in common, I thought as I pedaled faster to reach a different part of the crowd. And then we were at Lake Montebello and I was overwhelmed by crowds, so R. and I peeled off for a paired ride home, quick and easy, a beer and a party in Waverly to follow, another lovely Friday night in Baltimore.