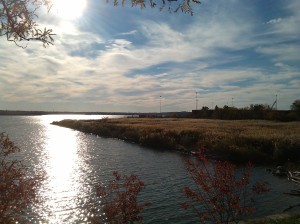 Oh, what a beautiful day for a bike ride on Thursday! The sun was out between the frothy layers of clouds, I had finished my work for the day, and I had nowhere to be but on the bike. I headed down the hill toward the Inner Harbor bike/ped path, took my right turn to pedal around, and then headed up to Fort Avenue and the slight downhill to Locust Point for a ride around Fort McHenry. I’ve done this ride so many times at this point, but I still remember the first time–it seemed so far away. On this day it felt just far enough through just enough neighborhoods, and the park was empty in that way it gets this time of year. It’s cold enough to keep the tourists away, but the dog walkers and afternoon runners, and that one guy on a bicycle are still there, doing their turns around this park that has been so many things–a military installation, a prison, a hospital, a campground, a National Park, and oh–a wetlands. And then the wetlands were destroyed to make all those other things happen, but now we’re trying to bring them back, and the wetlands are another part of this park’s museum. I stopped to check out how things are going with all that, because looking on a googleymap recently, it looked like the wetlands took up much more space than I’d remembered. Yes, I rode my bike to look at something that I mostly just saw on an internet map–maps and layers, layers and maps, that’s what’s on my mind this week. I snapped this picture looking out as the sun reflected off the water, and this way of looking, yes, the wetlands seemed significant, the thing that is here now, and I felt pretty lucky to get to see such a pretty scene. And then I did my turn around the park and headed back the other way, a quick detour to see what’s behind Fort McHenry and the scouting grounds and parking lots. There’s a flag, some vintage heavy artillery, and a whole bunch of signs telling me not to trespass, to keep out, that this is not my property. As far as I could tell, it’s the US Army Corps of Engineers mooring facility or somesuch. I’m not sure what they do back there, but it was a nice reminder to remember what’s under and behind all the views. I took mine and headed back the way I came, a quick stop for a haircut and a beer, and then a ride home under pink skies before it all turned dark again.