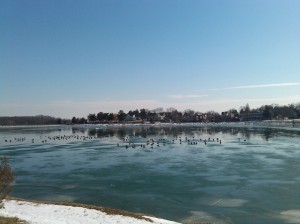 It was a balmy winter day in Baltimore on Monday–almost 40 degrees–and Tuesday promised another cool down, so I had to get in a rare ride. I know, I know, I could ride on the freezing icy snow days–let a little air out of bigger tires, wrap my feet in plastic bags, take all the lanes.  I see my downstairs neighbor Z. riding up to our door from his daily commute downtown, so I know it can be done, but I’ve decided to walk/catch a ride/take the train until the icy patches are gone and I can ride without my fingertips going numb. It’s a frustrating situation, though, so we’ll see how much longer it can last. But this Monday I had a free hour to zip over to Lake Montebello, passing that twittering bush filled with birds at the corner of 32nd and Barclay, zipping down 33rd as a regular part of traffic, and then doing my turns around the reservoir, trading wide smiles with the rest of the folks who had the time to step outside on this beautiful day. I stopped a couple of times to watch the birds on the water, some of which is frozen over. The gulls were flapping in the open water that rippled in the strong wind, and these geese–tiny spots in this picture but much bigger in person–were standing on ice, some sleeping sitting down, others with a leg tucked under and the other standing, and some walking across the ice, looking like they were walking on water. I did a couple of laps against wind that seemed to be in my face no matter which way I turned, and then it was time to head back home, the long way, snaking through Ednor Gardens and Waverly and back to Charles Village. Oh, more temperate winter, please come back!