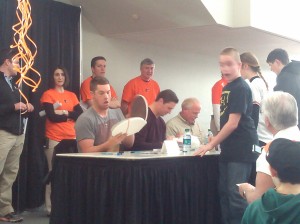 It was downright warm out on Saturday, and after wasting half of it in bed with books and cats there was a flurry of activity as I got myself together to jump on the bike and head down the hill to see what was happening in our fair city. Oh, it was good to be on the Surly again! I am so much more myself when I get to pedal about town, and this ride was just what I needed. I took Maryland down and up and down and up and down again to the Convention Center, which was bustling with activity for middle class folks of various stripes: baseball fans, people into planning expensive weddings, and dance/cheer team enthusiasts. I had a ticket to precisely zero of these events, but hey, I’m part of The Public, and I’ve got the skin of somebody our society’s decided to trust, so I just walked in and around to see what folks were doing. The wedding expo was getting set up, and the cakes were just beyond. Can you imagine spending $1,200 on a cake, even if 140 people get a bite? Apparently a bunch of people can. The runway was up, ringed with limos you could rent should a bike not be classy enough on the big day, and folks were preparing to sell such various and sundry items as mosquito control and portable toilets and photo booths–I had previously considered only one of those essential to the whole wedding project. I left the ladies to set up and headed up the stairs and over to the next building where everything was orange for Orioles FanFest. There were lots of lines, none of which I felt up to waiting in, especially when I could stand back and watch this kid get this excited to get another autograph in his special homemade autograph book that from my angle kind of looked like a toilet seat cover. And then the call of the warm day drew me out of the building and back on the bike to head up Baltimore Street to Butcher’s Hill for an errand. When I got there I realized I’d grabbed the wrong set of keys, so I was off for a speedy pedal home for a swap and back again. This is the kind of moment where you might want a car, or at least one of those Zip ones, so as to avoid the frantic ride home and out and home again to get to your evening plans on time. But on Saturday, it was the perfect excuse to tack another 7 miles onto my ride, and another chance to show off my sparkly safety vest to the admiring crowds–ok, maybe just one guy–in Jonestown. It was a good day of riding about, and a good reminder of the great privilege I have to pretty much go wherever I want to go. Yeah, everybody should have that. Everybody.