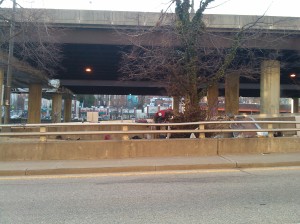 I got to take the Surly out on Friday, first up and over to Hampden for a morning appointment and then down and over the other way to Federal Hill to meet A. for a ride to campus and an afternoon of meetings. I took the long way downtown so I could zig zag the Jones Falls Trail and ride the path past the salt garage on Falls Road. Rumor has it we’re running out, but we do have at least the three mountains of the off-pink stuff there. I took my right on Maryland and sped past the bus station, the senior center, the Ethiopian place I love, the edge of Mount Vernon Square, the Walters, the library, the hit of the old west side, and then I was on the other side of the convention center and stadiums and in Sharp-Leadenhall, which is really different from Federal Hill, apparently, though it isn’t immediately clear where to draw the lines. It was good to be out in Baltimore again, to pass through one neighborhood after the other, watching them change and saying my how-you-doin’s to my fellow Baltimoreans waiting for buses, crossing streets, and enjoying the dry before the next storm. I took the Fallsway route back up the hill to home, past the park populated by people without homes, the place where unemployed people can find job assistance, poor people can access at least minimal health care, the prisons and jails, and this spot just at the on-ramp to I83 where people have pitched tents and use the railings to dry cleaned clothes and store food. But you know what’s really shameful? The part where Russia hasn’t even hung curtains in some of those hotel rooms. And then I was home again, the bike stored, ready to tune in for the opening ceremonies. Let the games begin!