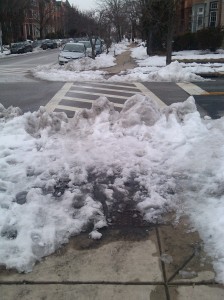 I don’t know if you’ve heard, but we’ve had some snow storms here on the east coast. I love a snow day as much as the next school kid/employee, but oh, it’s ruining biking for me. I don’t bike on ice or snow, because staying upright demands not changing speed, changing direction, or braking, and those are three things I’m really in to doing when I’m on a ride. I’m happy to snuggle up with candy and television for the day, but the aftermath is terrible for anybody not in a car. The main priority is clearing the roads for motorized vehicles, and that means pushing all the snow into the bike lanes and shoulders, and that means taking the lane, which also means avoiding new potholes and mounds of salt and irritated drivers. Hey, I’d be in a bike lane if it weren’t covered up to make life easier for you, so maybe stop honking at me? Biking is easier than being a pedestrian, though. Look at the snow and ice piled up at this curb cut in Charles Village. There’s a desire line over the pile of snow, and now that line is as slick as the snow tube in Sochi. But at least finally on Sunday I got a ride in, short as it was, down to the Walters Art Museum for a free walkabout, lunch with N., and a zippy ride home, taking the lane and reminding myself that with the right clothes, temperature doesn’t matter, and we’ve got a few dry days ahead. Maybe. When’s spring again?

One thought on “Snowed-In Sidewalks in Charles Village”