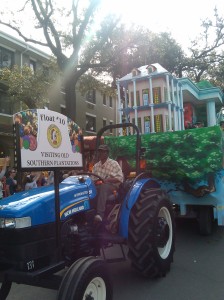 I spent my Friday packing Brompty in her new suitcase and then flying slowly south to New Orleans for the first weekend of Carnival, my annual pilgrimage to this place that used to be home. It was Brompty’s first flight, and I had all the jitters of a new mom dropping her baby at day care as they took my sweet bicycle away with the rest of the checked bags. She came out fine at the other end, and oh, I was glad I brought her along for a Saturday riding all over town. I headed toward Uptown from the Treme, a ride I used to make as often as I now make the ride up the hill from the Inner Harbor. This time I was off to meet P. and C. and the rest of the gang for the day’s Uptown parades. It was such a lovely ride, through the calm-before-the-storm French Quarter and the CBD with its new-to-me Rouse’s. Luckmore Finance is still (not) there, folks without homes are still spending their days under the expressway, and the dairy is still making noises. I didn’t see if the fork was still embedded in the asphalt at Baronne and that first main drag in Central City, but the Muses were still there, just after the houses that are still decaying, just now their skin is off. I said my how-you-doin’s as I made the slight turns to stay north, and then I took a left and a right and I was on St. Charles. It was warm and sunny, and all the people were out, already linking the curb and neutral ground, sharing beers and tossing footballs and guarding their territory, and then I spotted P., folded up Brompty, and made myself at home. D. got there next–she belongs here and not in Baltimore, so I’m glad she made the move–and then N. and the rest and then stick truck–the parades were here! I got in position, ready to gather my beads, and oh, it was all so familiar. The Farhad Bug Grotto, the lead floats and their awkward “royalty,” the horse units and high school bands and floats making their first of many appearances for this season. The fire truck marked the end of the first parade and then the second started to roll–Krewe of Choctaw. Everyone in redface. I turned to C.: there’s nothing weird about this one, not at all. Parade theme: Choctaw Vacation Destinations. And this, Float #10, “Visiting Old Southern Plantations,” a float filled with white men towed by an African American man, before “Visiting Spain” float and after the marching band from Baton Rouge’s Tara High School. Now, there’s something terrible about all of these parades and their histories of racism, classism, and all the rest, but this moment, well, yeah–pleasure’s complicated. Or not. And then it was over and N. and I rode past my old house on the way to get pizza before I made my old ride back down to the Marigny/Bywater to catch the ‘tit Rex parade–miniature floats, miniature throws, and me on my miniature bike–and I got to run into E., J. and their two delightful kids; L., D. and their two delightful kids; L.; J.; R.; M., D., and their sweet baby boy; A. from Baltimore; S. and A.; T. and M.; and all the rest–the gang’s all here, and oh, it was good to see so many faces I know. I miss this place, yes I do.

4 thoughts on “Krewe of Choctaw Plantation Float at Charles & Louisiana”