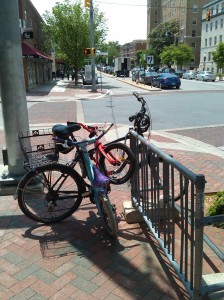 Tuesday’s ride was a tough one, straight up the hill and then down another and up one more on my way to an appointment in Mount Washington, winner of my Least Bike Accessible Neighborhood in Baltimore award. Then again, I got there, so I guess the least accessible is fairly accessible after all, but don’t forget your water. The ride home’s much easier, once that damn Lake Avenue is climbed. Thank you, gears, and thank you, self, for not being too stubborn to ride slowly enough the get passed by pedestrians. On the way back, the hill levels out right around Boys Latin School, with its sprawling campus and impressive tree canopy and bridge over the street so these high schoolers can make their way around the campus that looks more like a small college than a high school. “Living the Laker Legacy,” their signs say. I rolled down Roland Avenue, passing Gilman School for Girls and Bryn Mawr, the alma mater of a student I had in class this semester. She told us about a field trip her class took to the Inner Harbor. President Street was closed due to construction, so the bus driver took them through West Baltimore–I’m guessing Jonestown–to get around the traffic and get them back up the hill. Parents complained that the bus driver put their precious children in danger by driving a bus through West Baltimore. The bus driver was fired and the school switched bus companies because these kids were momentarily a little to the right of central Baltimore. There may be more to the story, but I suspect the “more” would be some tired alibis. So many private schools, so many examples of the wide gap between the education upper class white kids are getting in Baltimore compared to middle and working class Black kids. I thought about how the overwhelming response to integration has been the withdrawal of white people from the space being integrated. Rather than integrate public pools, so many communities just closed all the pools. White students abandoned public schools at increasing rates about Brown v. Board of Education, and it keeps happening as privatization spreads through what should be a public good. I was pretty worked up by the time I was back in Charles Village. And then I saw this tangle of one grown up and two baby bikes outside of a restaurant, the family inside, all still wearing their helmets, the oldest girl keeping her scooter with her. Oh, that made me smile. Gotta make room for it all, you know?