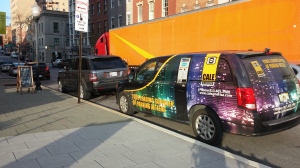 Monday’s ride was a regular one, down the hill, a right, a left, a right, a left, a right again to the bike racks in front of University of Maryland Medical Center where I locked up before walking up to the shuttle stop to meet N., my most loyal shuttle buddy, for our ride into work. It was my first day back in the office and back in the classroom since my pops died, and I was a little nervous. It all felt rather mundane and normal, which was a huge relief, and seeing N.’s pinched-against-the-cold face under the hat she’s been wearing for basically her whole adult life put me at ease.

We rode in, I said my hellos to K. and the staff of the department down the hall. How was your break? Well, it was ok except my dad was killed when a driver drove his Ford F-150 into him in a crosswalk and killed him. Awkward conversations, but also fine ones, because L. and C. in the Education Department are my everyday friends, and they’d want to know. I made some phone calls, answered some emails, cleaned out the fridge, packed half a box–we’re moving offices next week–printed syllabi, and made a few notes for the first day of class. One thing at a time, and it was frankly a relief to have some things to do that were so easy.

And then it was time to teach. I haven’t been that nervous for a class since the first discussion session I led for Daniel Boyarin’s class at Berkeley back in Fall 1999. I still remember it–my scheduled classroom was filled with some other TA’s class, and I led the group of 30 or so students who were basically my age around a campus I didn’t know very well looking for an empty room. My voice was shaky, my hands vibrating, and I was pretty sure I was going to pass out from the nerves. The same thing worked to calm me down this time, though: I counted my breaths, reminded myself I can do this, and then just started talking. Turns out I’m a professional teacher now, and nerves or not, muscle memory kicked in and we got through the first class, and A., a student I’ve had in a number of classes, said it went just fine. I was jubilant walking back to the shuttle, as if I’d accomplished some massive goal. I can do this, I can be in grief and in everyday life, at the same time. Great. The bike ride home was a cold one, against a headwind. I had stopped to brag to my old friend S. on the phone about my grand victory when I snapped this picture of car pulling up outside 521 Park Avenue, bragging about being Your Leading Supplier of Parking Meters. I had two quick thoughts: nobody likes parking meters, so I wouldn’t exactly label yourself like that if you want folks to leave you alone around here; and second, oh, right, the state outsources stuff like parking meters, which means when they break or the state needs new ones, they’ve got to keep going back to that private company. No biggie, maybe, when we’re talking parking meters, but when we’re talking oil spills and the only ones with the technological know-how to fix it and assess damages are the oil companies themselves, well, we might find ourselves in a bit of a pickle. Eyes still work, check. And then I rode the rest of the way home for a lazy evening, because that was plenty enough work for the day.