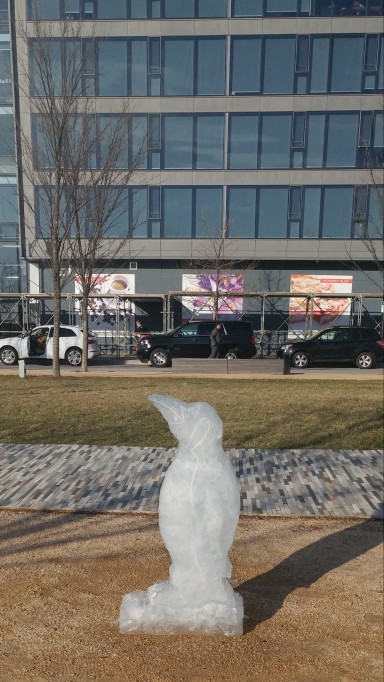 It was a cold and windy end of the week, but after spending two hours getting home by overcrowded and much-delayed buses on Wednesday, I took the bike Thursday and Friday. Thursday’s ride was a zippy one down the hill, no biggie, I thought. Yeah, the cold wind was straight in my face on the way home. Still better than waiting for the Red line.

Friday’s ride took me down the hill and over and up to Harbor Point, the new-ish development on top of the toxic waste dump on the other side of Harbor East. It’s maybe three blocks from there, but we’ve named it something different, so now we have a new destination. I was on my way to try another fancy boutique franchise gym. Since the whole cancer thing turned my body into an untrustworthy death machine, learning to trust it again as a powerful source of good has been a trip. Fortunately capitalism is so busy selling us the idea that our bodies need to be other than they are that there are innumerable body challenges for me to take advantage of, and sometimes the first class is free.

Not so at [solidcore] (yes, that’s how they write it). Two classes for $39, purchased as a holiday gift to myself. Michelle Obama does these classes, so I figured I should be like her. She exercised before her first class and regretted it, according to the blogs, so I was worried riding my bike there and back would be a bad idea. Not as bad an idea as waiting for the bus, though, so I took the bike. A year ago this week my bike ride was three quarters of a mile, not sure I could go any farther. Now I’m sure I can make it there and back, no matter how far away it is. Big difference.

I got to Harbor East, navigated around the construction on yet another luxury apartment building, and made it up the new bridge the city built so people don’t have to drive or walk the extra five blocks to get to the development over here. I locked up on an empty bike rack and noticed what I first thought was an old plastic bag in the shape of an ice sculpture of a raven. Turns out it was an ice sculpture of a penguin. And then I noticed the many boxes of ice blocks people were moving, one at a time, into the square of green over here. Definitely some kind of ice festival set up, I thought, just like that one Hallmark movie. They are going to make this a family friendly destination, one new tradition at a time.

I went into my gym class, this one like being in a blue-hued nightclub. They asked me to do things with my body I just couldn’t do, but I tried, and when it was over I worried I wouldn’t be able to get myself home. But I could, slowly but surely. I’ll do the second class because I paid for it already, but after that, yeah no. Thanks for the efforts, body. You are the best, even when you’re not.