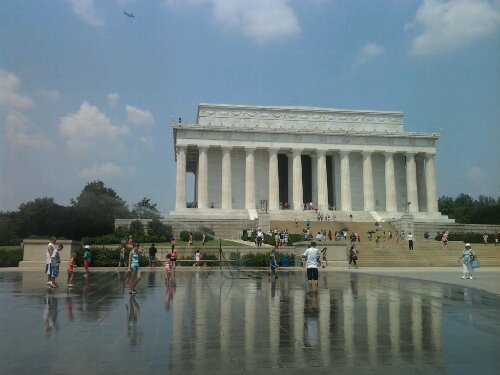 Oh, man, it was hot today, and I was travelling by bike in a city I don’t know well. By the time I righted all my wrong turns from Columbia Heights to Georgetown to meet H. for brunch, I was a sweaty, frazzled mess. I folded down the Brompton and went into the air conditioning to wait. The bike tucks so neatly under a table, and I think I’m finally over my nerves that folks won’t let me bring her inside. After we parted ways I headed down to the alleged bike/ped path along the old C&O Canal, but I just wasn’t up to dodging rocks on the unpaved trail or hopping upended bricks on the other side. The heat was already geting to me, so rather than try to follow the googleymap, I just gon on Pennsylvania Avenue and pedaled until I got a nice breeze going. Eventually I saw a sign directing traffic to the Lincoln Memorial, so I took the soft right until I was in the well-signed tourist area. The place was summer-crowded with school tours in matching t-shirts, so I got off and walked until I found myself on the right side of the memorial~the side with the sprinkler. Oh, thank you, National Park Service! I snapped this picture before getting myself sprinkled, and then I was back on my way, past the Korean War Memorial, around the Washington Monument, and past museum after museum after museum until I reached the Capitol Building. Union Station’s right behind there, so I took a right, pedaled up the hill, dodged cars and pedestrians in the roundabout, and was finally back in air conditioning. I sucked down a couple bottles of water befoere boarding a delayed MARC train back to Halethorpe for a quick pedal to my car that I left on campus yesterday. And now I’m home, rehydrating, and looking at maps of DC for my next trip, hopefully after the heat wave has waned a bit.