Thursday’s ride took me down to the Maryland Historical Society (MdHS) for what is basically my wet dream: a party celebrating Baltimore’s bicycling history, brought to us by Baltimore Heritage, the MdHS, and the International Cycling History Conference. I zipped down the hill, and P. caught up to me at the light a block north of Preston. I asked her where she was going–she said she was going where I was going. I guess I’m fairly predictable when it comes to bikes and histories and things. We rolled up to the event, locked our bikes, and headed in to catch the last minutes of the vintage bicycle display. It was all high-wheeled death-defying velocipedes and old steel kids bikes and all manner of cycling enthusiasts, from the tweed-clad Victorian players to the single-speed hipsters to the family commuters, and we all milled about, chatting about whether we’d like to climb on the penny farthings or not (I was in the “no” camp, surprisingly) until it was time for the group ride with our fearless nerd leader, Eli Pousson of  Baltimore Heritage. He led at least 50 of us up the hill and to the left to visit the original home of the very first bicycling club in Baltimore, over in Reservoir Hill. The velocipedes were a total hit with folks on the street, and the rest of us were mere background. Our next stop was Druid Hill Park, which apparently has been a great place to ride in circles for a very, very long time. I was riding with Bikemore President Chris Merriam who got his own looks for towing a trailer behind his bicycle. We were stopped at a light on a downhill, and one of those velocipedes was wobbling toward us. “I need a strong shoulder, Chris, a strong shoulder,” I heard, as he reached down from high above to grab Chris for a stop. A grab and then they both went down in what felt to me like slow motion, Chris falling into the web of the big wheel’s spokes. See? ALL bikes need brakes, and then I thought about the matching rhetoric against the death machine velocipedes and today’s single-speed demons–the more things change. Chris and I peeled off from the group after this, him heading home and me to a fountain soda and some minutes outside, by myself. Out was a perfect bike evening, even if I couldn’t hang with the group ride for long. I’m glad we were all there, and that the fight for bike rights to the road continues, 150+ years after the introduction of the first two-wheeler in Baltimore.

Today’s bike ride took me up the hill through Hampden and then over to Roland Park to meet V. for lunch and some reading and writing. Roland Park is so fancypants, what with its Greek-columned mansions hidden behind personal forests and Tuxedo pharmacies and complicated cul de sacs that are hard to figure out unless you live there. It’s like an entirely different city, that place. END_OF_DOCUMENT_TOKEN_TO_BE_REPLACED 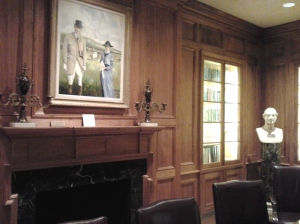 I’ve been spending an awful lot of time over the past few months reading about museums and historical societies and historical parks and monuments and such, so today I figured it was time to visit one of those places to see what I might see now, after all that. I hopped on my bike in the much cooler and much windier weather and headed down the hill. I settled on the Maryland Historical Society, which I thought a lot about this week while reading about Fred Wilson and his work, Mining the Museum. END_OF_DOCUMENT_TOKEN_TO_BE_REPLACED 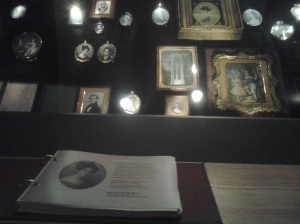 Today’s ride took me down the McKeldin Square to drop off a staple gun to the folks at the media table at Occupy Baltimore before a couple of hours waving signs on the corner with B. and B. The square was fairly empty this afternoon, which surprised me, given the sunshine and Saturday-ness of it all, but maybe folks were still out on the walking tour of Inner Harbor bad guys. END_OF_DOCUMENT_TOKEN_TO_BE_REPLACED 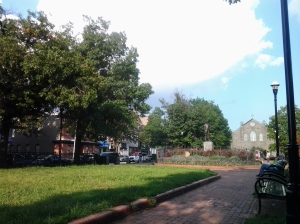 The sun was out today, and oh my, but that can lift a girl’s mood. I took the bike and headed down the hill to the Hippodrome for volunteer usher training (yes, I’m already acting like a retiree). I’ve been through downtown, but I’ve never been through that neighborhood, and today it was bustling with people shopping, street-preaching, waiting for the bus, and just generally enjoying the sunshine. END_OF_DOCUMENT_TOKEN_TO_BE_REPLACED