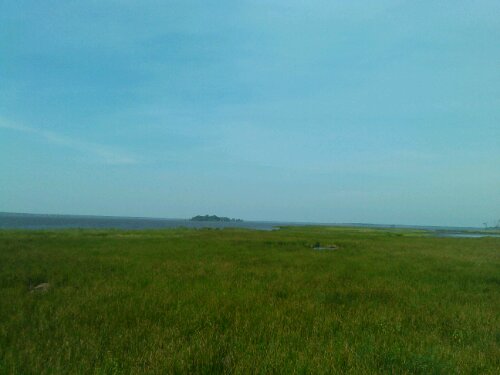 Tuesday was hot. Humid and hot, and I woke up kind of dreading the thought of a bike ride, to be honest, so I left the hotel early so I could get some miles in before the heat really laid in. Oh, I’m so glad I did. I drove the bike out to Blackwater National Wildlife Refuge and followed the signs for the bike route. I took my right onto Wildlife Road, paid my one dollar entry fee, and then I was at the edges of the earth, which is how wetlands feel to me, both land and water, and the road set precariously and temporarily between the two. Dragonflies zipped all around me, and red-winged blackbirds were everywhere. I saw more herons and egrets than I could count, and the smell–the smell!–was so *clean*. I snapped this picture from an overlook, but if I’d taken the picture facing the other way, there would have been more water, and a stand of trees in the foreground. That’s the thing with wetlands–you have to be there to see it all, and what you see will be different in a heartbeat. I rode away from this lookout, took my left back out on the main road, and was joined by flapping herons and young eagles just barely above my head (or that’s how it felt anyway) and it was all so fantastic I heard myself actually say out loud, “this is magic,” because it was. I extended my ride as long as I could, relearning, again, that if you’re traveling fast and easy, you just might have a tailwind, and you’re going to have to pay it back going the other way. I spent the rest of my day in the car, following ghosts down back roads and getting myself good and lost trying to find the end of Hoopersville Road. So many lives lived and being lived on the same shifting ground. 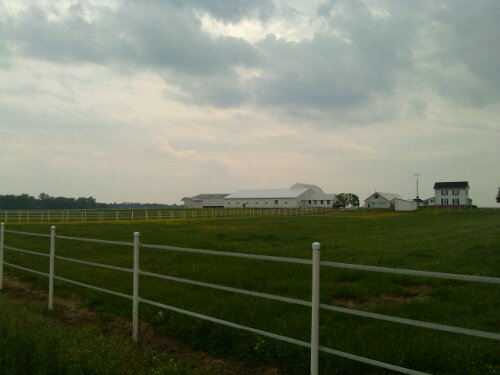 Today I rode my first century, and here are some things I saw: fields and fields and fields of golden flowers; rows of just-sprouted somethings; horses playing chase with each other; chicken houses; two miniature ponies in a field that wasn’t miniature at all; swamps and marshes; purple flowers; patches of irises that I wanted to gather for my mom for mother’s day; piles of food and happy faces every 20 miles or so; a dead snake and a dead possum with his mouth open, blood still staining the road; and so, so so, many fields and farms like this one and others with waving greens. Oh, and a whole bunch of bicyclists. I saw a zillion other things too, but mostly I saw all of us kick out our miles, and even in those last 7 miles of driving rain, I was pretty much a happy clam. I could spin all day every day, so beautiful it is. We shall see how I feel tomorrow, but tonight I feel warm all over, tired and a bit addled, and altogether satisfied. Huzzah!