The week of bike riding got considerably better after Tuesday, and Wednesday’s ride was cold, sure, but the sun was shining and the sky was blue. I dressed aspirationally, again, so shivered my way up to Abell and back down and around to Locust Point for a day at McHenry Row. That place is so weird–a hint of the suburbs plopped down in the middle of things, but from an American point of view, it sure is convenient. I spent my day doing things that didn’t need to be done, and then I headed home. I stopped for a quick turn around Riverside Park. There was a cop playing catch with his service dog, a couple of high schoolers who looked to be spending their spring break high on the weed, and that was about it. I snapped this picture of the public pool, still dry and empty of swimmers. Soon, soon, and yes, public pools for all! We have allowed ourselves so few shared resources–libraries, roads, and parks–and in Baltimore, even these feel under attack. If we’re going to have a state, I think I’d prefer a state that keeps parks and pool and libraries open, instead of one that funnels cash to the rich on the fantasy that they’ll pay for this stuff out of their own sense of goodwill. And then I pedaled home, put on a sweater, and was on to the next one. 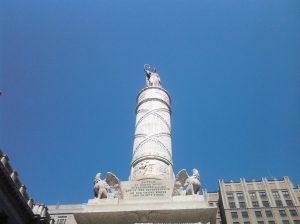 Today was bike tour day, so I woke up early, kinda nervous, and reviewed my notes for our six-stop tour of historic War of 1812 sites in the city before bringing Brompty downstairs for a good ride over to our starting point at Riverside Park, one of the oldest parks in Baltimore. A small group gathered, and we made our way over to Sharp-Leadenhall, where I talked about the history of African Americans in the early Republic, and especially in this neighborhood, the oldest African American neighborhood in the city. END_OF_DOCUMENT_TOKEN_TO_BE_REPLACED