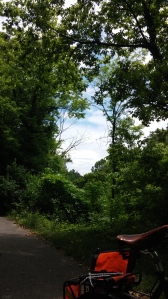 It was a beautiful sunny summer weekend, the ladyfriend was on a much-needed out of town adventure with herself, and I had absolutely no plans. That’s some perfection right there, and I spent the Sunday of it riding my bike around. I left my house at high noon, all lotioned up with sunscreen and nowhere in particular to go. I had it my mind to maybe hit SoWeBo Fest, so I rode south and west and west to avoid my regular work commute route but to be heading in generally that direction. And then I was pedaling through west Baltimore on an old commuting route I used to take when I first moved to Baltimore. I decided to see if that bridge on Old Frederick Road had been replaced, and once I got there and saw that yes, it had been, I was on the Gwynns Falls Trail, so why not take it to the end?