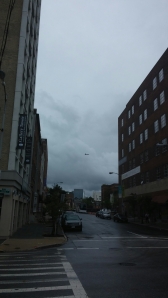 This weekend was the Star Spangled Celebration, Baltimore’s party in honor of the bicentennial of the Battle of Baltimore near the end of the War of 1812. Francis Scott Key wrote the lyrics to the Star Spangled Banner that night (or inspired by that night), and even though it didn’t become the national anthem until 1931, you’d think the way we’ve been acting these days that the country was founded that very night by this very song. I’ve been super interested in how we remember this unmemorable war since I started biking out to Chalmette National Battlefield, where they act like the war was the birth of a happy multiracial country just because Creole folks fought alongside Jean Lafitte (not just a pirate–a slave trader, but they always leave that part out) at the Battle of Orleans. Then I got to Baltimore, where the Battle of Orleans is a footnote and the whole war is about this one battle and the flag and the song. END_OF_DOCUMENT_TOKEN_TO_BE_REPLACED