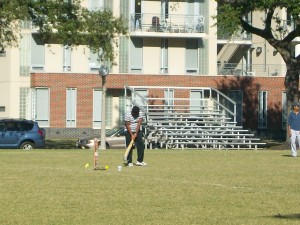 Today was a beautiful day in New Orleans: mid-70s, blue sky, shining sun.  It was the perfect day for a bike ride, so I tooled around Uptown after doing some work on campus.  I saw these men playing cricket out on the lawn in front of the student center.  Now, cricket is not a very popular sport here in the U.S., so I was a bit surprised to see the wickets up.  I love sports, but cricket is one game I’ve never really watched or understood.  To me, it’s a game of colonization, one brought by the British to their colonies and left behind as a popular sport.  These remains of colonization are everywhere, including in sport.  It goes along with the logic of colonization: the colonizing country occupies a place, constructing the colonized as in need of civilizing influence, which means exerting not only military, political, and economic control, but also cultural control.  And one of the primary tools of this civilizing by culture is sport.  I was thinking about this today as I was missing college football games, making plans for watching tonight’s World Series game, and wondering why the Saints are playing in London after all.  Sports are nation-building projects, and nationalism can be an ugly force.  But still, I’m rooting for Tampa Bay tonight.  Because we like underdogs to win in the USA, if only in theory.  Sport is complicated.

One thought on “Cricket at Tulane”