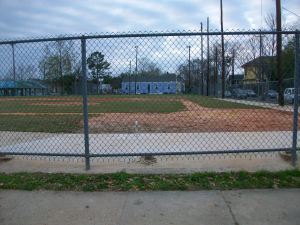 I had never seen New Orleans before I drove in on I10 last summer.  I moved in to a house on Laurel Street that I rented, sight unseen, from a Tulane professor who was on leave.  Just down the block was a FEMA trailer park in what used to be a park.  I don’t know that there were a lot of people still living there, but the guard station was up and cars were parked next to trailers two years after the levees broke.  Then, as the year progressed, the trailers were gone.  They seemed to just disappear one afternoon, leaving an empty lot.  Then the machines rolled in and ripped up the concrete and shoveled in huge mounds of dirt.  That’s how I left it when I moved this summer.  Today I rode over to N.’s house to return the bike lock she so kindly lent me until I could get a new one, and I passed by the old FEMA trailer park.  Now it’s a park again, this time a baseball diamond.  It’s still fenced in and closed to the public, but it’s almost done.  It looks great.  Sometimes stuff does indeed get done here in New Orleans.  I just hope the folks who left those trailers found themselves nice places to live too.