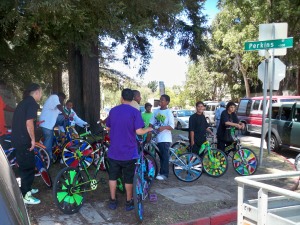 I’m in the Bay Area for a week visiting my dear friend S., who is recovering from major surgery. I was a bit nervous to be away from my bikes for that long, but thankfully S. has a bike, and she has graciously ceded it to me for the week during her many naptimes. I lived in this place for years, slowly earning a Ph.D., but haven’t been back since I picked up biking. It’s already like discovering a whole new city. Because that’s what it’s like to be on a bike–it’s about discovering, the little tiny details. So I hopped on the bike and headed over to Lake Merritt to see what I might find. I almost instantly ran in to a bike festival of some sort, where I snapped this picture. These are scraper bikes, tricked out and shined up with colorful spokes. The scraper bike movement is an Oakland original, and today they were out for Bike 4 Life: Healin From Killin, Bike Ride For Peace. I expected to see lots of bikes in the area, but these were an unexpected treat. Bikes are just frames with wheels and pedals to make a pulley system propel, but they can be used in so many different ways. The bay is made for bikes. I mean, there’re  bike lanes all over, and bike racks to go along with them, BART allows bikes most hours, and the 16th Street Mission station even has a dedicated rail groove thing-y to roll your bike as you walk down the stairs. But this is the kind of bike community you expect from a region known for its city composting program. Scraper bikes are something else: art, politics, and, of course, transportation in a city where getting around is way, way too expensive. Bikes can be a kind of social justice. After I left this gather, I rode to the museum and then over to Fruitvale to see old friends and their new baby. Then is was off to the city for drinks at a very, very old haunt with new friends. Yes, I think I’m going to like biking around here this week.

One thought on “Scraper Bikes at Lakeside Park”