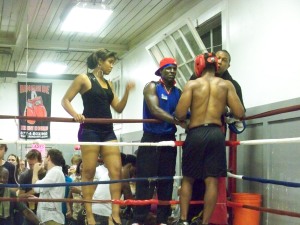 I spent today using my bicycle for transportation. Yes, the bike is not just a toy. It is how I get from place to place. Today found me riding to and from the coffee shop and then uptown to the Freret Street Gym for their Friday Night Fights. My friend S. has been training for a month and was ready, sort of, for her first bout. This was my first trip to the fights, and I was quite tentative. I mean, boxing is just gratuitous violence, right? And what about the scantily clad women paid to wander around? And the part where people of color are often fighting for a largely white audience? It seems awkward and unpleasant in so many ways. In the abstract. Being there tonight was completely different. Everyone was excited, and I felt myself joining them. I picked someone to cheer for each fight and really got in to it. I snapped this photo during the break between the second and third rounds in the final fight of the night. This fighter was definitely winning. He’s talking here to his trainer while the man in the Domino’s Pizza uniform adds his advice and the ring girl looks on. He looked pretty tired at the end of the previous round, but you could tell here that he was the favorite, and he looked like the winner to me. The night was overall a good example of the narrow definition of masculinity, and the uncomfortable pleasure to be found in watching that definition play itself out to the delight of the crowd. I had a surprisingly good time. I thought I might feel out of place on my cruiser bike, in my pink skirt, but I actually fit right in, in a way that made me think about my position at these fights. Freret Street is supposedly going though this “renaissance” of sorts (i.e. white people are moving in), and the crowd at the gym, including me, certainly reflected that discourse about the neighborhood. New Orleans is a city with racially mixed neighborhoods, or at least streets, but sometimes it just feels like white people have moved in and taken over a neighborhood. After the fight I hopped back on my bike and headed down to the Marigny for drinks with S., who was not victorious tonight. As I rode through this city tonight I thought about the ways in which this city is both surprisingly racially integrated and terribly segregated. I have a whole lot to learn a whole lot more about the economic and political reasons people live, work, and play in particular neighborhoods.

One thought on “The Red Corner at the Freret Street Gym”