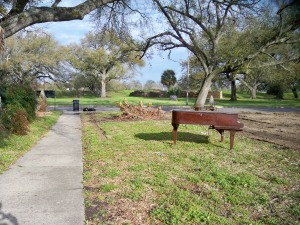 I met up with S., an old friend from college yesterday for beer, chatter, some of her homebaked pecan sticky buns (positively ridiculously delicious–if you are in Memphis, hit that farmer’s market for sure!), and, surprise, surprise, bike gossip. You see, she has this bike that an ex gave her, and it has been living in a basement in New Orleans while she’s off grinding her own wheat flour in Memphis. Why yes, S., I’d be happy to give that bike a temporary home! I had the day off and was celebrating my fourth anniversary of quitting smoking, so I took the new bike in for a rear rack and some minor adjustments, and then I spent the day getting to know this speedy little machine. Oh, it is so fast. I zipped over to Bayou St. John and then up Wisner to Lake Pontchartrain. I snapped this picture of a broken down piano sitting in a yard on Beauregard near Killdeer. First, I love the names of streets here. Second, why did somebody tear down the whole house around the piano and then just leave the thing here? Who used to play it? Is someone coming back for it, or is it just going to sit out here waiting for someone to figure out how to truck it to a new home and then get it in playing condition again? I guess I know how to throw out regular trash, but a piano? I guess if it were mine, I’d end up leaving it out there too. I continued my ride to the lake where I sat and watched the sun glint off the breaks and the pelicans swoop low on the water, put out their landing gear, and settle in. I headed back downtown via St. Bernard, watching the neighborhoods change their style of blight from block to block. R. and S. both took rides on the new ride following the Patois benefit for Haiti. They dug it, for real. They both ride cruisers, so this niftly little road bike is a completely different experience. It’s like you’re one with the bike and the road, R. said. Yep. I have a feeling we’ll all help this new bike make up for lost riding time. It was a long and active day, one that in so many ways was possible only because four years ago, I decided I was done with cigarettes. To life!

3 thoughts on “Abandoned Piano at Beauregard and Wisner”