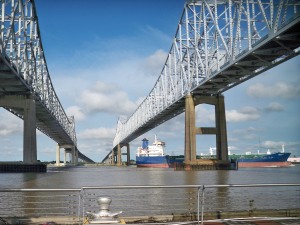 I woke up to a spectacular rainstorm this morning. I moved my car just in time (sort of) and lay about in my apartment listening to the drops pelting my tin roof. It was all very nice and such, but it rained all day yesterday, too, and I needed it slow up so I could ride my bike. I mean, two days without riding in a whole week? I get too itchy too fast for that sort of thing. And New Orleans weather changed it up just in time, as it sometimes does. I hopped on the Surly and headed downtown to the bike shoppe to drop her off for a check up and rode off on a cute little Schwinn rental to check out the scene by the river. I rode over toward Mardi Gras World to see if there were crowds for the Gulf Aid concert, raising money for folks hurt by the BP oil river. BP is clearly responsible for this disaster. But so is Transocean. And Halliburton. And as I took a picture of a ship passing underneath the Crescent City Connection that crosses the river to a whole slew of New Orleans suburbs, I thought about how deeply implicated in this debacle we all are. Ours is an oil culture; we’ve got to change that if we’re going to avoid these disasters in the future. Because as long as there’s oil drilling, there will be oil spills; it’s a cost we imagine is external to the business, but it’s not. I continued my pedal over to the concert. A guy walking back to his car said there were several thousand people there, and more were expected later. The price was a bit too steep for me, and I really think BP et. al. should pay for this clean up, not me, so I continued my ride back Uptown, happy to be back on a bike, wishing we were all on bikes.

One thought on “Ship Passing Under the Crescent City Connection”