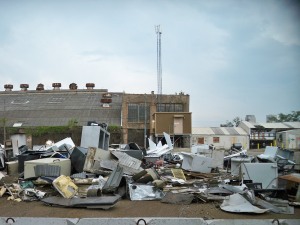 As you’ve now heard, tropical storm Bonnie has broken apart and storm warnings have been canceled and this is all the very best news for us. I took my bike, left my raincoat at home to tempt the fates, and headed to Mid-City to meet D. and M. for lunch. It was delightful to ride with some cloud cover and a completely free afternoon. I rode back to the French Quarter along Toulouse and stopped to take a picture of this pile of debris between at N. Dorgenois before jogging half a block over to Lafitte. This is the Mid-City location of Southern Recycling, and today the pile was pretty small–some old refrigerators, washers, dryers, all sundry appliances, and a car hood. I think recycling is great–who doesn’t? Problem is, the recycling has to pile up somewhere. Why do neighborhoods like this one always end up with the mess and pollution and trash? Can you imagine something like this Uptown? Nope–this one’s in Iberville. Sometimes, the town’s geography literalizes its politics. I continued my ride to the U.S. Mint, where I learned about the history of the place and also took in their exhibit, Target America: Opening Eyes to the Damage Drugs Cause. The exhibit is all the cliche you expect from the Just Say No crowd, including  a tie-dyed t-shirt under glass, reported to have been popularized by users of LSD and marijuana. There was nothing in the exhibit about any connection between where people are told they belong and the rest of life chances.

One thought on “Southern Recycling Scrapyard at Toulouse and N. Dorgenois”