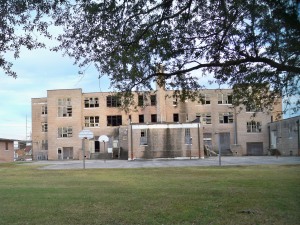 It has been a long week, so when I was finished with work early, I took the late afternoon to ride my bike around in what continues to be absolutely ridiculously nice weather. I hadn’t ridden the new bike lane on St. Roch Avenue, so I headed there to check out our new bicycle facilities.

I spend very little time in that neighborhood, so I just rode around, checking things out. I turned on Music Street and noticed this school, seemingly abandoned, gutted by fire. I circled around it, waving to the guy standing on the corner, smelling the barbecue wafting on the air, thinking about how this is a neighborhood, but this abandoned school is rotting up the place instead of being alive with kids and playground equipment (there is some–not in usable shape by any means). I rode back to the Quarter for a quick snack before heading to the YMCA on Dryades in Central City for a meeting of the Mayor’s Criminal Justice Working Group to talk about plans for a new Orleans Parish Prison. The place was packed with folks who have been fighting for years against a justice system that individualizes social disorder by putting people in cages rather than working to solve problems like poverty, racism, sexism, and classism as well as mental health and addiction issues and the myriad other reasons people find themselves in jail.

The audience was admonished to remain polite at all times, to treat our public servants with respect. Now, I’m all for respect and politeness. If you know me, you know I am incredibly nice–I listen well, I empathize, I have a great sense of audience. But sometimes we are angry, and for good reasons, and I hope those public servants don’t just stop listening at the first expression of it.

Midway through the meeting, Mayor Mitch Landrieu sat down next to me. He put his arm around my shoulders, and then around the back of my chair, stretched out his legs. He smelled like herbal cough drops, so I asked him if he had an extra. He put his hand on my thigh, gave it a stroke, chuckled, and gave me a candy. Was he just being folksy? Didn’t feel folksy.  Awkward. Someone finished an “angry” comment, and he shouted out, “That’s nasty. That’s nasty.” And then he muttered, under his breath, which he never would have done, I’m guessing, if I hadn’t been a sweet white girl in a skirt next to him, “It’s kind of fun sitting in the audience, just yelling, not having to do the work.”

Speakers tonight included people with the ACLU, VOTE, the Juvenile Justice Project of Louisiana, leaders from Safe Streets, Strong Communities–shoot, Helen Prejean was there. You know what? It isn’t fun or easy to work to save your own life and your own communities all day, every day, to live in neighborhoods like the one pictured here, pocked with burnt-out schools and blighted properties and crime (which is never solved by bigger prisons, by the way), to attend meeting after meeting after meeting, for years, watching your neighborhood fall further into disrepair, and to have people stop listening to you because you sound “angry.” No, Mayor, that’s not fun, not fun at all. We have to work together, but it has to be in good faith. Stop breaking ours.

One thought on “John A. Shaw Elementary School at Music & Law”