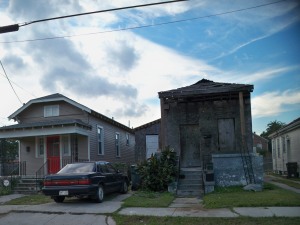 I had one of those days where work just gets the best of you, so when the day was done, I needed to go on a bike ride. I headed toward Broadmoor with no real destination when I stopped to take this picture of a dilapidated house on Calhoun, between Rocheblave and York. It looks like it’s made of weathered old cardboard, lacking the comfortable facade of its neighbor. Just a few blocks on and I was on Versailles, looking at huge and beautiful homes. And then I was back at Jeff Davis Parkway, headed toward the park again. As I entered the park, meaning to bike to the lake to watch the sun set, I remembered that Wednesdays are free days at the museum, and the place is open late–perfect. While I was locking up my bike, a little kid on a little bike cried that he wanted to park his bike too. Yes, I’m a role model for children. After polishing my halo, I headed in to check out the exhibit of 20th century photographs of Louisiana. There was one of Elvis lounging in a hotel room that just made me swoon. But as I was looking at them, I was thinking about how common photos are now, how many of us take our digital photographs and post them in various digital universes. A photo like the one I took today is nothing special where in the past it might have been something of a record. I wonder what the future will make of our piles and piles and piles (or rather, files and files) of amateur photographs. Me, I’ll keep snapping them, especially because sometimes they show the sky. I mean, seriously–look at that sky.