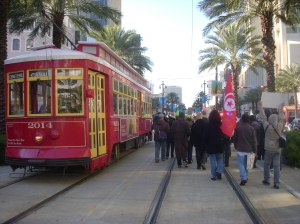 Today’s ride started off under a clear blue sky with a bright sun–no more frozen precipitation for us, thank you very much. I headed over to C. and P.’s house for a baby shower–congrats, C. and R.!–and then rode down to meet up with a rally some folks organized to stand in solidarity with the people of Egypt. I spotted a crowd on Poydras and headed over with my bicycle to join them. I don’t at all think our few hundred voices will have a direct effect on the revolution, so why bother? We talked about this a bit in my class last week in a conversation about different kinds of political organization–how do you know if an activist tactic is successful? Well, it depends on what you want. I want all kinds of things, but today I wanted a place where like-minded people could find each other. I wanted a way to say to myself and to my community that I see a connection between what happens here, to me, to us, and what happens “there,” especially when there and here get all muddled up together. Today I talked to R. about politics in the Bahamas and how to organize with Amnesty International in places that don’t want to see that sort of thing. I found out about an event on Wednesday that looks interesting. I saw that all kinds of people are making connections between shared and different struggles. And I saw some good looking bikes that were making political statements all of their own. And the march made the news so other people in the city know that there’s this voice out here. And then I rode to S.’s house to drink tea and grade papers before doing the Chartres/St. Claude lap. Success all around, I say.