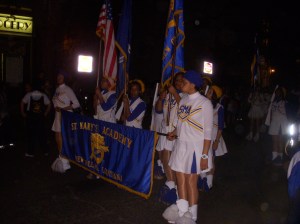 I woke up this morning with parading on my mind. Which meant I couldn’t really concentrate on anything, so after trying and failing to get some work done, I took the bike out to work out some nervous pre-Mardi Gras jitters. The sun was shining bright, the skies were clear, and I was flying through neighborhoods, feeling incredibly happy. And then it was finally time for the first parade! I hopped on my bike and met N. for our annual pre-game margaritas, and then we both zipped over to 6th and St. Charles to join C. and P. at our usual spot. Mardi Gras is here! I snapped this picture of the Maryites from St. Mary’s Academy as they waited for the trucks up ahead to get moving so they could kick off the Oshun parade–they were not the only ones hoping they’d get on with things. And then it rolled. There were the floats, the bands (O. Perry Walker was awesome), the dance clubs (Superstar Steppers, I ❤ you), and beads, so many beads. As soon as it was finished, I rode down to Canal to see it again, because that’s just how I feel about Mardi Gras parades. There are more tomorrow, and the next day, and all next weekend. It’s on, and I’ll be there on my bike.